Warn UCC from taking over our land – Kwaprow chief to government, Lands Commission 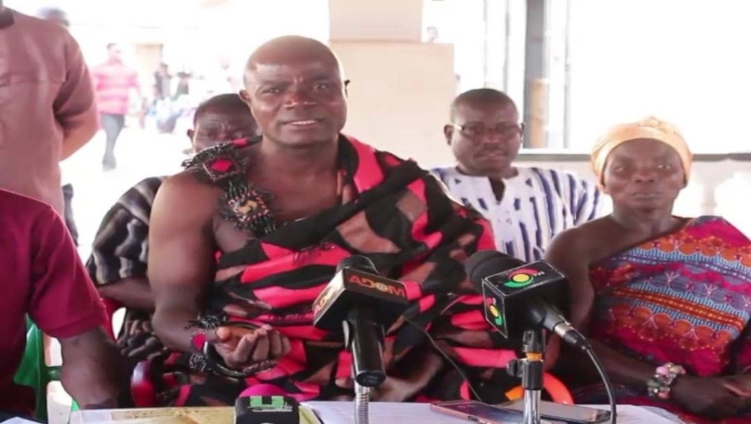 The Chief of Kwaprow, a suburb of Cape Coast, Nana Kwesi Mensah III, has petitioned the government and the Lands Commission to warn the University of Cape Coast (UCC) from taking over their land.

At a news conference at Kwaprow, the chief indicated that leaders of the university were claiming ownership of lands belonging to the Kwaprow community, the second oldest community among the six communities surrounding the university.

He said the university intends to extend its boundaries, a development that was not recorded in the registry of the lands commission.

Nana Mensah III explained the circumstances surrounding the purchase of the university land and how the university has over the years been abusing them.

He stated, “In 1960, the government claimed the land from the six communities. The agreement was never finalized, which has brought about a lot of consequences that may cause many problems in the future.

He highlighted how the government initially planned to relocate the six communities but changed its decision due to how big the land was. This, he says, calls for the government to come and establish the boundaries between the university and the communities.

He continued, saying that after the demarcation, the land owned by Kwaprow as part of the seven square miles was 938 acres and added that the university had taken 602 acres of it, an act the community could do nothing about.

He again stressed that what the community now occupies is 336 acres of land, which the community agreed to register with the lands commission.

Following the reluctance of the university, the chief said the community wrote a petition to the regional minister, the paramount chief, and the university so that the plan to register the land could be executed.

He stated that the new Vice-Chancellor of the university, Professor Johnson Nyarko-Boampong, has also refused to go by the demarcation made by President Kufuor and has decided to make new ones.

Nana Mensah III said the issue has been reported to the regional minister but nothing has been done about it.

“We have written to the regional minister but nothing has come of it. This is what we want journalists to hear and inform the president so he can delegate people to come and go over agreements made with the communities, especially, Kwaprow, to solve the land issue and bring peace. Otherwise, what we inherently intend to do, we will, which will affect the peace between the university and the community.”

He claims that since asserting ownership of the land it currently resides on in 1960, the university has not carried out its social obligations.

“Since the university owned the land in 1960, it has done nothing for the community. No social responsibility and no compensation. Thus, there’s no purpose for the land the university claimed. The land has been leased to business owners while the people of the community get nothing.”

“The traditional leaders who gave out the land to the university have regretted that decision, and we call on the president to help with the demarcation of the boundaries so that the community can register its land.”

He stated that the community is giving a 6-month grace period after which it will take action.

Speaking on behalf of mothers in the community, the queen mother of Kwaprow, Nana Afoa I, said the university was putting them through a hard time.

She said lecturers recommend their own for admission into the university and provide them with job opportunities but do not do the same for the youth in the Kwaprow community.

She also mentioned that some of the male students also impregnate the young girls of the community who go to campus to hawk, creating problems for parents.

She pleaded with President Akufo-Addo to help them resolve this issue with the university.

“Mr. president, Nana Addo, this is the time we need you. Now, the university has blocked the usage of certain roads by community members and the university security is creating transportation issues for traders and drivers. All this is because of the university.”