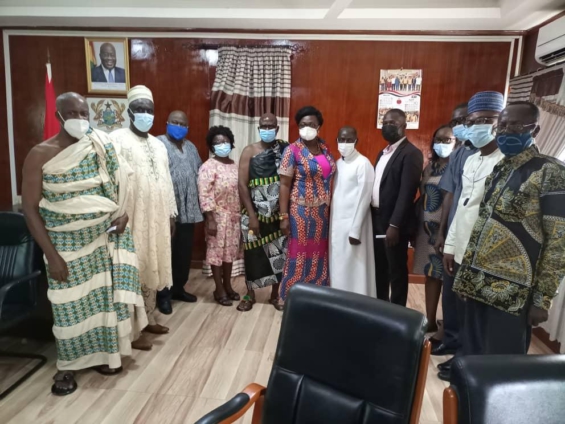 The Bono Regional Minister, Justina Owusu-Banahene has called on the Regional Peace Council to step up efforts at devising realistic strategies to address protracted chieftaincy disputes in the region.

“We must work together to identify and tackle the remote causes of the long standing chieftaincy disputes that threatened the peace of the region,” she said.

Such disputes, she said, retards progress and called for effective collaboration between the Regional Security Council, Peace Council, and the Regional House of Chiefs to iron out all misunderstandings.

Madam Owusu-Banahene said this when the Regional Peace Council paid a courtesy call on her in Sunyani.

She said peace remained a pre-requisite for development and urged the stakeholders to device preventive measures to curb it, rather than allowing the disputes to trigger into conflicts and violence that impacted the socio-economic growth of the area.

Issues such as land litigation had huge potential to disturb the peace, the Minister said, and called for collaboration with the Lands Commission to help resolve land disputes.

She assured the Peace Council of her readiness and commitment to supporting it in all its activities.

The Executive Secretary of the Bono Regional Peace Council, Suallah Abdalah Quandah took the Regional Minister through the activities of the Council and hoped the Regional Coordinating Council would support his office to address potential conflicts that threatened the peace of the region.

He congratulated the Regional Minister on her appointment and called on the people to support her to improve the development of the region.