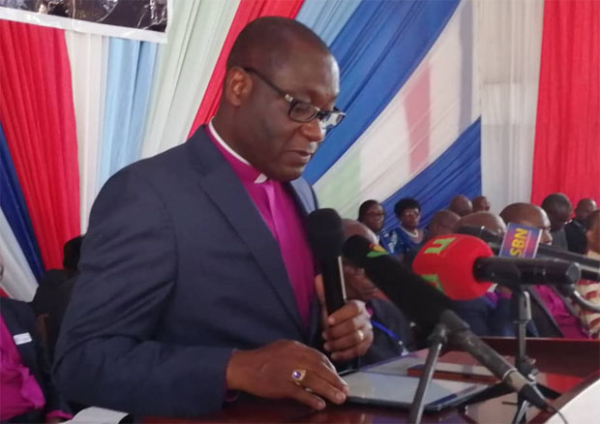 Officials of the National Peace Council dispatched to Bawku to aid in mediation efforts in ending the chieftaincy conflict have returned to Accra after receiving reports of gunshots in the area.

There have been renewed fights between the feuding factions amid reports of gunshots, leading to the loss of lives and destruction of properties.

According to the Chairman of the Council, Rev. Dr Ernest Adu Gyamfi, who signed a statement urging both sides to use non-violent means to address their concerns, the team of mediators will return to Bawku when the situation in the area normalises.

“The team arrived [in Tamale] in the morning when there were gunshots, and so they could not do the mediatory work that they were supposed to do. They went along with some CSOs who have partnered with us as long as the work is concerned, and they met the Regional Minister and some other dignitaries.”

“We are hoping that after today, the situation will be clearer because one of the festivals was supposed to have been celebrated today. As of now, we have no word as to what is happening now, but after today if the situation remains calm, the team might go back to see what we can do to help resolve the problems there,” he explained.

In an interview with JoyNews, he further highlighted the Peace Council’s resolve to continue dialoguing with stakeholders to find a lasting solution to the conflict.

“We had a peace advisory team that is in Bawku; unfortunately, the key person who was leading the team died a few weeks ago, and so that disrupted our operations a little bit, but we hope to get them back together.”

“Whilst we do this, we think that there is the need for a holistic resolution of the problem, and so we’d be getting in touch with the Minister of Chieftaincy Affairs because it is purely a chieftaincy matter.

"Once we resolve the situation and there is peace, there is a need to resolve the chieftaincy issue so that this thing will be done once and for all.”

In a related development, Police in the North East Region have beefed up security in Nalerigu and Gambaga following the renewed chieftaincy violence between Mamprusis and Kusasis in Bawku in the Upper East Region.

According to the Police, the move is to forestall any reprisal as tensions continue to rise in the two Mamprusi towns following the killing of two natives of Gambaga and the arrest of elders of the Mamprugu King.

On Tuesday, the National Peace Council (NPC) called on the chiefs and opinion leaders in Bawku to a ceasefire and adopt non-violent ways to resolve their grievances.

“The call particularly goes to the leaders and youth of both sides of the conflict.

“The National Peace Council and other stakeholders in the Bawku peace process would like to urge the parties further to stop all acts of violence and commit to non-violent ways of resolving their differences,” portions of the statement read.

The statement also highlighted a similar event that led to the imposition of a curfew on the Bawku Municipality and its environs in the Upper East Region by government through the Interior Ministry.

NPC, however, urged the Upper East REGSEC to “conduct the necessary inquiry into the circumstances that led to the unfortunate occurrences and after that.”

They also called on the REGSEC to develop appropriate recommendations after the inquiry was set up.