We support gov't use of Heritage Funds for free SHS but... -AFAG - MyJoyOnline.com 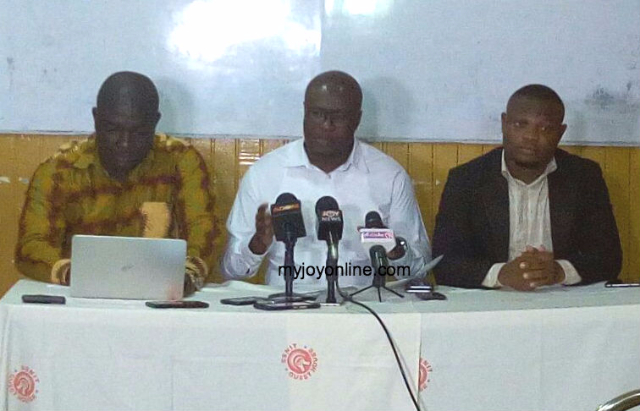 Pressure group Alliance for Accountable Governance (AFAG) says it is in support of the Akufo-Addo-led government using the Heritage Fund to execute the free senior high school (SHS) programme.

The group, however, adds that any money government uses must be considered as a loan which should be paid in the next three years.

They have two proposals for government to consider for future funding of the free SHS programme which was one of the campaign promises which brought the New Patriotic Party (NPP) into power.

Over the weekend, president Nana Akufo-Addo announced that government would fund the cost of the public for all those who qualify for entry from the 2017/2018 academic year onwards.

He explained that by free SHS there would be no admission fees, no library fees, no science centre fees, no computer lab fees, no examination fees and no utility fees.

There has been a feisty debate about how the policy will be funded.

Senior Minister Yaw Osafo Maafo is reported to have said at a forum in Accra on Wednesday that the Heritage Fund is one of the options government is considering to finance the programme.

This has been met with a lot of public backlash with civil society groups opposing the idea.

The Heritage Fund was set up to support the country’s future generations when the oil reserves are depleted. And for this to be achieved, nine percent of the country’s annual petroleum revenue is paid into the Fund every year.

At a press conference at the SSNIT Guest House in Accra Thursday, the General Secretary of the group, Arnold Boateng who announced AFAG's support also proposed that government must set up an SHS Fund to serve as vehicle to fund the policy

The group also proposed that government must consider using some monies accrued from taxes to fund the programme adding that the proposed reduction on some taxes by the government should be suspended so that money is used to fund the free SHS.

Read their statement below:

Free, quality Senior High School is critical to building the human capital needed to build and sustain a knowledge-based economy. Fellow Ghanaians, the burden of illiteracy is far costlier. Poorly educated youth is a price the nation cannot bear.

As such, it is important for the government to raise the needed funds to honour this great policy. It has nothing to do with politics. AFAG holds the view that this is about the future of the youth of this nation. For this reason, AFAG is not against the use the Heritage Fund in supporting the policy.

When is the future? The future is now.

However, AFAG’s position is that any amount of money taken from the Heritage Fund in support of the free SHS be seen as a loan payable at an interest rate commensurate with returns the Heritage Fund would have made if the fund were invested on the open market.

Ladies and gentlemen, AFAG proposes that government should consider the creation of anSHS Fund within three years from the start of the free SHS program to provide support on a long-term basis. Three years from the running of the SHS Fund, the government should pay back the debt owed to the Heritage Fund. We, therefore, call on Parliament to consider a repayment program and demand commitment from government to honour its promise, should they adopt AFAG's proposal.

Ladies and gentlemen proposes two options for raising funds for the free SHS on permanent basis;

The time is now to tame greedy people in business who have corrupted the system and by that created an imbalance, which has distorted the business environment. The government should be bold to blacklist and punish such companies. The loopholes must be closed now.

Investigations conducted and reports generated is available and yet none of these recommendations has been implemented. It is unacceptable, and AFAG urges President Akufo Addo’s government to act now!

At a point, AFAG would have no other option than to begin to name and shame these people and at the same time drag them to the court to face the law. In as much as we appreciate the fact that a new Attorney General just assumed office and the promise of an Independent Prosecutor by the newly elected NPP government is yet to materialise, we shall play our democratically mandated role as stipulated in the constitution to the fullest.