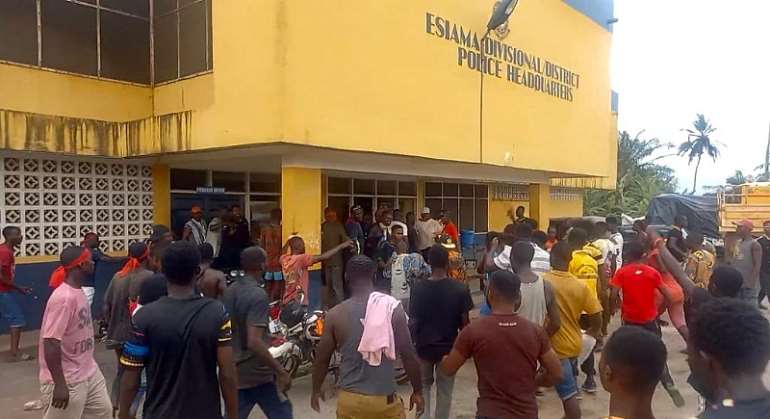 Some individuals besieged the Essiama Police Station and damaged properties, including louver blades, windows, and windscreens of some two parked buses and a pick-up, among others.

Management of mining firm, Adamus Resources Limited, has said it will continue to liaise with stakeholders to ensure sustainable mining in its operational areas.

The Company says more concerted efforts are being made to prevent a reoccurrence of the disturbances that led to the death of one person at Nkroful on Friday, April 1.

Some individuals besieged the Essiama Police Station and damaged properties, including louver blades, windows, and windscreens of some two parked buses and a pick-up, among others.

The irate youth also attacked some state institutions, according to the Police.

The group’s action is said to have stemmed from the death of a resident who was shot when security personnel at Nkroful attempted to disperse the agitated crowd that massed up in front of the Nkroful District Court after some 28 illegal small scale miners were brought to the court.

Andrew Donkor is reported to have died at the Ekwe Hospital.

A statement issued by the Communications Directorate of the Company acknowledged that “this incident happened when some illegal miners who had been arrested on our concession were appearing in court for the first time.”

“We understand this incident followed an attempt by security officials of the state to control a storming crowd at the forecourt of the law court and that one person sadly lost his life with others sustaining injuries.

“Our thoughts are with the family of the deceased, and it is our hope that the injured will recover soon. We will continue to work with all stakeholders to promote responsible and sustainable mining and ensure that this undesirable occurrence does not recur,” the Company said.

The Inspector General of Police (IGP), Dr George Akuffo Dampare, has assured of his outfit’s commitment to probe actions that led to the destruction of the Essiama Divisional District Police Headquarters.

After leading some members of the Police Management Board to visit Essiama and Nkroful, he said the perpetrators will be brought to book.

“We have come barely 12 hours after the incident, just because of the difficulties of getting here earlier. Either than that, we would have come at the time that the incident was happening and walk with you to deal with it.

”We will use every means within the law, slow but sure to pick every person who has been involved in this and deal with the person in accordance with the law in a manner that the person would regret being part of such an act for it to send the strongest message to the rest of the people in the community,” he said.