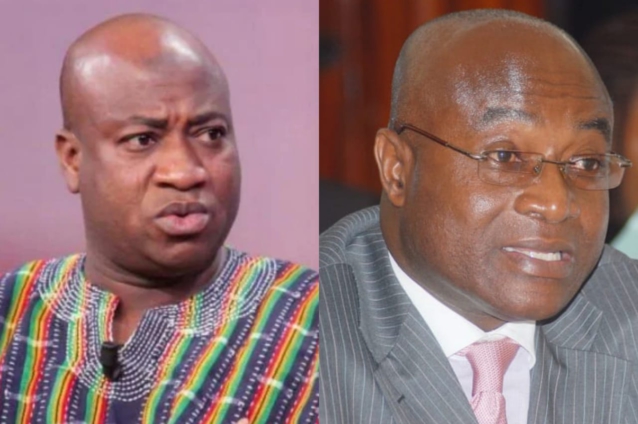 Tamale Central MP, Murtala Mohammed has questioned the Majority Leader’s grasp of the law, in relation to that of the Speaker of Parliament, Alban Bagbin.

According to the NDC lawmaker, Osei Kyei-Mensah-Bonsu’s limited appreciation of legal matters cannot be compared to the experienced Bagbin’s understanding of the law.

Establishing the distinction between the two, the MP stated that at the time when Bagbin was practising law, the Majority Leader was trading in spare parts.

“Kyei Mensah Bonsu has a penchant for attacking the Speaker. And he does that with alacrity. We want to serve notice to him, that we will not allow him to disrespect the Right Honourable Speaker.

“And he said that Bagbin doesn’t understand the law. Honourable Bagbin has been in practice as a lawyer for several years. At a time when was practising, you Kyei were selling spare parts at Magazine. That’s what you were doing”, the MP said in an interview on Citi FM on Wednesday.

The Tamale Central MP made these remarks while expressing his reservations about the Majority Leader’s reaction to a ruling by the Speaker on the floor of the House on Wednesday.

On Wednesday, Speaker Alban Bagbin had ruled that the Privileges Committee’s report on the fate of Dome-Kwabenya legislator, Sarah Adwoa Safo, is not final.

The Committee in its report on the absenteeism of Adwoa Safo from parliamentary meetings recommended that her seat be declared vacant for failing to provide an explanation for her absence.

But delivering the much-anticipated ruling, the Speaker noted that the report of the Committee must be tabled before the whole House for a decision to be made.

“It is for the House that will go through it because the mandate given to an MP, representation is so crucial that it cannot be left to the subjective view of any person or group of people but the whole house”, Speaker Bagbin said on the floor on Wednesday.

However, this did not go down well with the Osei Kyei-Mensah-Bonsu. The Majority Leader who doubles as the Suame MP said the ruling is “unfortunate.”

“I am expressing my discomfort with this unfortunate ruling that you have made. I totally disagree. I think it doesn’t sit with the Constitution and with your own earlier statements that you made in this House relating to those same things. Very inconsistent,” he retorted.

This reaction caused another clash between himself and the Speaker who did not take the comment lightly.

Alban Bagbin demanded a retraction to which the MP reluctantly obliged.

In a subsequent press conference, the Suame MP added that “the Speaker is totally wrong in his understanding of the Constitution”.

He said the Speaker’s ruling flouts Article 97 of the law which the Speaker quoted as the justification for his ruling.

But according to the Tamale Central MP, Murtala Mohammed, the Majority Leader’s arguments are inconsistent, and hence he must learn to accept the pronouncements of the Speaker without needlessly challenging them or confronting the Speaker.

He argued that when the same Privileges Committee recommended that the House as a whole should decide the fate of Assin Central MP, Kennedy Agyapong and Ayawaso Central MP, Henry Quartey, for the offence of absenting themselves from the House’s sittings, Kyei-Mensah-Bonsu did not object but agreed.

Meanwhile, Mr Kyei-Mensah-Bonsu has indicated that his side will file a motion against the Speaker’s ruling.

DISCLAIMER: The Views, Comments, Opinions, Contributions and Statements made by Readers and Contributors on this platform do not necessarily represent the views or policy of Multimedia Group Limited.
Tags:
Alban Bagbin
Murtala Mohammed
Osei Kyei-Mensah-Bonsu
Parliament
Privileges Committee of Parliament
Sarah Adwoa Safo