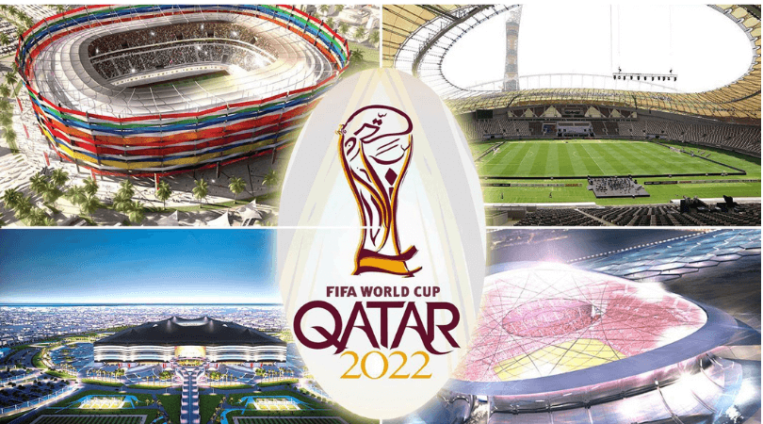 After 12 years of questions, criticisms and conjecture, the Fifa World Cup in Qatar will finally get under way on Sunday.

The build-up to the first tournament to be held in a Muslim country in the Middle East has been overshadowed by a number of controversies.

But Fifa has asked all 32 competing nations to “focus on the football” and hosts Qatar will kick off the tournament against Ecuador at Al Bayt Stadium (16:00 GMT).

The home nations that have qualified are in the same group and in action the following day, with England up against Iran (13:00), before Wales play USA (19:00).

BBC Sport looks at the list of controversies, the excitement building on the ground in Qatar, and who could win the World Cup.

What have been the controversies?
Qatar 2022 will go down as one of the most talked about and controversial World Cups in history.

The Gulf country defeated bids from South Korea, Japan, Australia and the United States to host the tournament, but there were allegations of widespread corruption in the process, which Qatar have always denied.

However, the Qatar government said the total was misleading, because not all the deaths recorded were of people working on World Cup-related projects. The government said its accident records showed there were 37 deaths among labourers at World Cup stadium construction sites between 2014 and 2020, only three of which were “work-related”.

However, the International Labour Organisation (ILO) said that was an underestimate.

There have been fears over how LGBT fans can expect to be treated given the country’s strict adherence to Sharia Law, with homosexuality illegal in Qatar.

Organisations engaging with Fifa over the tournament have said “progress has been slow” and “issues of concern” remain.

UK Pride organisations have called on bars and venues to not screen World Cup matches in a boycott of the tournament.

Players have been urged to use their influence to speak up about the issues in the country and at a news conference in Doha on Thursday, England defender Conor Coady said “we’re not politicians”.

The Everton defender added: “We’ll never be politicians in terms of the way we look at things but, in terms of what the squad has done over the last few years and how much they’ve helped people, that comes with the territory.”

Sepp Blatter, who was the president of Fifa and the man who announced the awarding of the tournament to Qatar in 2010, said last week that decision was a “mistake”.

On the day before the tournament, Fifa president Gianni Infantino accused the West of “hypocrisy” in its reporting about Qatar’s human rights record.

In an extraordinary monologue at a news conference in Doha, Infantino spoke for nearly an hour and made a passionate defence of Qatar and the tournament.

Temperatures in the summer often reach 50C here, which is why the tournament was moved for the first time to a ‘winter’ slot, though it is still a balmy 32C during the day and a pleasant 22C in the evening.

It has meant European leagues have been brought to a halt mid-season, with the opening game taking place just a week after the last Premier League match between Fulham and Manchester United.

Three months out from kick-off, the Fifa council approved a request from the South American confederation Conmebol to move the start of the tournament a day earlier than planned.

And just two days before the event, organisers announced fans would not be able to purchase or consume alcohol inside or within the perimeter area of any of the eight stadiums.

At 29 days from start to finish (20 November to 18 December), this will be the shortest World Cup since Argentina 1978.

That means organisers have had to schedule four games most days during the group stages and there is no turnaround time between the groups and the knockout stages, with the last 16 starting the day after the group stages end.

What will the experience be like for supporters?
A country which has a population of less than three million, Qatar expects to see a total influx of about 1.2 million visitors from around the world over the next month.

At a briefing last month, Fifa said nearly three million tickets had been sold for the tournament, with the host nation topping the list of countries with the highest number of tickets at 37% of sales.

Travelling around the capital of Doha in the days before the opening game, the buzz is palpable with bunting with flags from each competing country lining the streets.

Argentina shirts are by far the most popular choice of kit on show, mostly emblazoned with ‘Messi 10’ on the back. Lionel Messi – one of the tournament’s star attractions – plays for Qatari-owned Paris St-Germain.

The country has spent billions on upgrading its infrastructure and the roads are already busy with locals and supporters from neighbouring Saudi Arabia expected to drive across the border. Fifa shuttle buses can be seen whizzing up and down the streets.

The metro carriages had been quiet early in the week but there was real congestion on the Friday and Saturday, the weekend days in Qatar. Questions remain as to how the system will cope with the arrival of tens of thousands of fans for each of the 64 games.

The Fan Festival at Al Bidda Park has bright, colourful lights illuminated overhead, with music pumping out at a nearby performance stage – though this is halted for a couple of minutes when the Adhan (call to prayer) is heard from nearby mosques.

Alcohol cannot be consumed in public in the Muslim country, but this rule has been relaxed a little for the tournament as fans can purchase a beverage in restricted areas such as the fan park, though a pint will set you back £12.50.

Who will win the World Cup?
Brazil have not won the World Cup since 2002 and are, in fact, the last non-European team to lift the trophy.

Statisticians Opta have crunched the numbers and their prediction model says Tite’s men are favourites to go all the way for a record-extending sixth time.

But Lionel Scaloni’s Argentina have the second-highest probability of being champions for the third time, coming into the tournament on the back of a 36-game unbeaten run.

Gareth Southgate’s England have hit a poor run of form at the wrong time, winless in their last six games as they look to take one step further from reaching the semi-finals four years ago.

Wales, who are in the same group, have qualified for the tournament for the first time since 1958 and will be aiming to reach the knockout stage again. That year they progressed to the quarter-finals before narrowly being beaten by eventual winners Brazil.

BBC Sport pundits have had their say with seven going for Brazil to win it, three for Argentina, two saying France will retain their trophy and only one plumping for England.

We lost one of the biggest stars on the eve of the tournament, with France striker Karim Benzema ruled out late on Saturday after sustaining a thigh injury in training.

Senegal forward Sadio Mane will also not be seen on the pitches in Qatar. The ex-Liverpool frontman has had surgery on a knee injury he sustained playing for Bayern Munich just 10 days before the opening game.

Manchester City striker Erling Haaland and Liverpool’s Mohamed Salah are two of the biggest players who won’t be in action as their countries did not qualify.

DISCLAIMER: The Views, Comments, Opinions, Contributions and Statements made by Readers and Contributors on this platform do not necessarily represent the views or policy of Multimedia Group Limited.
Tags:
Karim Benzema
Qatar 2022 World Cup
Sadio Mané