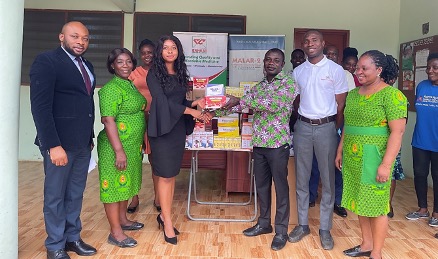 The donation included several doses of Anti-Malarial medication for adults and children, Painkillers, Haematinics and Multivitamins, to help support the municipality in the treatment of Malaria and its complications and to lower the burden of Malaria in the area.

The World Health Organization (WHO) marked World Malaria Day 2022, under the theme “Harness innovation to reduce the malaria disease burden and save lives.”

Sub-Saharan Africa is identified as a high burden region and WHO has called for investments and innovation to help bring new vector control approaches, diagnostics, antimalarial medicines and other tools to increase the pace of the fight against malaria.

ECL’s donation of their antimalarial product, Malar-2, suitable for both adults and children, was in response to WHO’s call to help fight Malaria in the sub-region.

The company also driven by the mission to make quality medicine accessible to all and continually demonstrates this through the donation of medications and other health products to several organizations, groups and communities.

She stated that “this donation is aimed at supporting the municipality in its fight against Malaria due to its high prevalence in the area and is also timely, as the rainy season comes with an increase in reported Malaria cases”.

Dr Promise Sefogah, the medical advisor and consultant for ECL, was also present for the donation. He stated that “The Awutu Senya East Municipality was selected because, it has been reported that, Malaria remains the number one cause of OPD attendance in the municipal area.

“Therefore, it is appropriate to support the municipality in the fight against Malaria”.

He also mentioned the harm caused by Malaria, especially to pregnant women and children, and any effort to support the treatment and prevention of Malaria is very important.

“This donation would help to fight Malaria, correct Anaemia so we have a healthy population, that can contribute to national development”, he added.