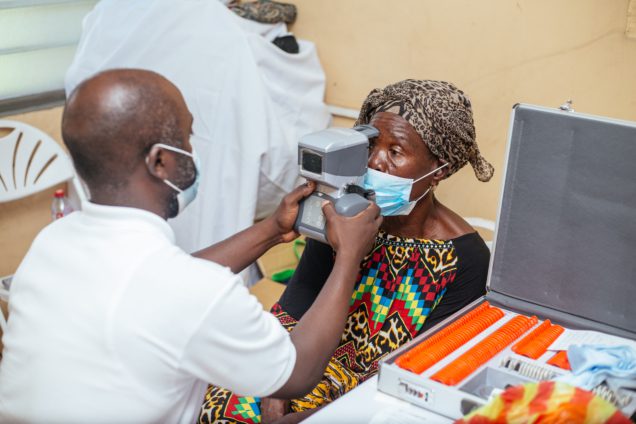 For many people, gradual eye problems come with old age, and so when they are hit, they tend to accept their fate.

However, 72-year-old Safiatu Abubakar, a tailor at Nima, was hopeful she will find a cure to her almost lost sight, even though she neither had the means nor knew how her “miracle” would come.

“There was a strong wind, which blew something into my eyes. Ever since that moment, I have had problems with my eyes. One of my eyes is almost blind”, she narrated as she joined a queue to have her eye checked.

Safiatu was one of about 500 residents of Nima and surrounding areas who received free reading glasses and eye care to aid their near-vision duties.

The aid, given to majority of women who are into dressmaking and hairdressing was sponsored by VisionSpring.

The global social enterprise with its headquarters in the USA, organised the free eye screening exercise to herald World Sight Day which comes off on Thursday, October 14.

As part of this year’s World Sight Day, the International Agencies for the prevention of Blindness IABP launched a program to have 1.5 million eye screenings globally. VisionSpring, an active member of the AIBP has committed to screening some 150,000 people across its eight countries of operations including Ghana.

One of the many screenings scheduled for the country came off at the Nima Government Hospital on Thursday. Majority of the people screened, reported cases of ocular allergies which is an itchy eye condition that makes affected persons rub their eyes excessively.

Also reported were refractive errors; a common eye disorder which occurs when the eye cannot clearly focus on images. This usually results in blurred vision and causes visual impairment.

Again, presbyopia, the gradual loss of the eye’s ability to focus on nearby objects was reported among persons aged 40 and above.  More than 40% of the participants needed reading glasses and they were prescribed for free.

Safiatu was ecstatic when she wore her eyeglasses and could see clearly.

“I can see everything bigger and clearly now. I couldn’t see from far off…but things are different now. I used to ask for help when I needed to thread a needle to sew, but I can do it by myself now”, she said with a wide smile on her face.

Safiatu wasn’t alone. Quincy Abbey, a 13-year-old who joined the exercise in his school uniform is hopeful he would improve academically with his new reading glasses.

“My eyes have been dropping water. They gave me this spectacle, it’s nice, and I like it. Now, I’ll be able to read clearly and pass my exams”, he said.

The Chief Operations Officer for VisionSpring, Leena Palav told the media more communities have been earmarked for such screening exercises.

“Nima is a community of entreprenuers, traders, hawkers, artisans etc, and that is an important group to us. Studies show us, a pair of eye glasses increases a worker’s productivity by 22%. That is a big number for someone earning less than four dollars per day”.

“So that is a huge impact in someone’s earning potential and that is what we want to offer to the people of Nima”, Leena told the media.

She said VisionSpring will build on its partnerships to touch at least one million people more in the next two years.

The screening exercise was conducted in collaboration with Total Vision with support from Allianz Life Insurance.