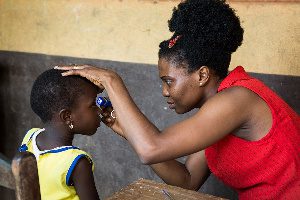 The world risks having millions of more people with visual impairments if nothing is done to deal with the rate at which people are losing their vision.

This is according to Sightsavers International Ghana, a non-governmental organization working in the country to eliminate avoidable blindness.

In a statement the organization declared the world to be in an “eye health crisis,” hence the need for authorities to act quickly.

Their call is part of a World Sight Day campaign, dubbed ‘Everyone Counts,’ spearheaded by the International Agency for the Prevention of Blindness (IAPB)

Senior Programme Manager of Sightsavers Ghana Country Office, David Agyemang says that “the number of people in need of eye care around the world is increasing dramatically.”

“Without intervention, the number of people who are blind globally could triple to around 115 million people by 2050. We are in an eye health crisis, but it is not a subject that gets the attention it deserves,” he added.

A 2015 Ghana Blindness and Visual Impairment Study conducted by the International Agency for the Prevention of Blindness indicated that about 0.7% of the country’s population were blind.

The study mentioned that the prevalence of blindness was higher in rural areas than in urban areas.
54.8% of blindness in Ghana was due to cataracts, according to the study.

“Access to quality eye care has a hugely positive impact on all areas of people’s lives. It can increase people’s ability to learn and work, which can directly lead to reductions in poverty and hunger and improve well-being,” he is quoted as saying in the press release.

An eye specialist in the country has already expressed worry over Ghana’s ophthalmologist-to-patient ratio.

Managing Director for Rods and Cones Optical and Eye Care Services, Dr Akwasi Agyemang Ahmed, earlier this year disclosed that there were just about 100 ophthalmologists to cater for the country’s over 30million population.