VisionSpring gives out pop-in eyeglasses to over 1,000 residents in Eastern Region 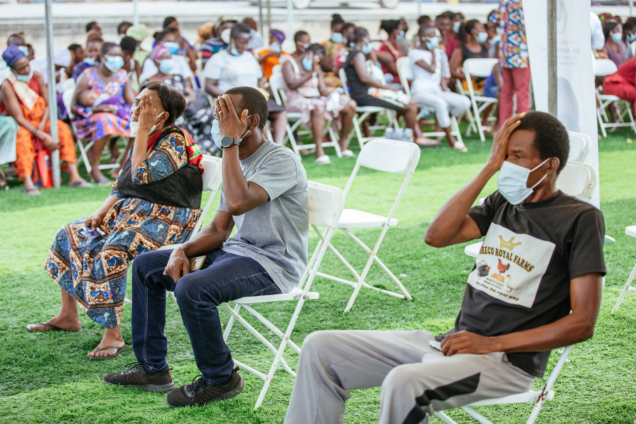 Over one thousand residents of Nsawam in the Eastern Region have benefitted from the free distribution of innovative pop-in eyeglasses developed by US based global social enterprise, VisionSpring.

The pop-in eyeglasses are a combination of pre-cut lenses and symmetrical frames which are fitted on-site for persons with refractive errors; saving them time and cost of going to the lens lab.

The exercise was funded by VisionSpring with support from the Member of Parliament for Nsawam Adoagyiri, Frank Annor-Dompreh.

The inability to read or comfortably undertake work was one major problem recorded among  participants, aged 40 and above.

Those diagnosed were screened and given reading glasses. A total of 1200 reading and pop-in eyeglasses and 1000 eye drops were prescribed for free to those who needed them.

For many of the participants such as 65-year-old retied teacher, Maxwell Asamoah Yeboah, receiving free eyeglasses was far beyond their expectations when they decided to participate in the eye screening exercise.

“I had no hope of acquiring new eyeglasses after I misplaced mine about two years ago. I have really struggled these two years, but for my wife, who is my sight. I can now see clearly and I am very happy”.

Similar sentiments were shared by 61-year-old Abena Akyaa, another retired teacher, who received her first ever eyeglasses on the day.

“I noticed a problem with my eyes not too long ago. And so when I heard the announcement of a free eye screening exercise, I decided to avail myself.  To be honest, I expected to be given a chit to attend the eye clinic later, as is done during such exercises. I didn’t expect to receive this free eyeglasses.

Now I can see clearly”, she said beaming with smiles as she wore her eyeglasses.

Children were not left out of the free exercise as a good number of them turned up to be screened.

For 8-year-old Pearl Sapong Twumasiwa, she will no longer be forced to sit in front of the black board and squint.

Her elated mother, who accompanied her to the screening, expressed how she has been relieved of a burden

“I am currently unemployed. I couldn’t have afforded the eyeglasses. I thank the MP and VisionSpring for this gesture.”

About 80 per cent of persons with refractive errors received solution on the ground. However, a few of them were referred for customized eye glasses.

The six-day exercise came off at three different centers, namely; Ankwa Doboro, Nsawam and Adoagyiri.  It was heralded by a pilot exercise in September 2021 which saw about 700 participants.

The Optical Technical Advisor for VisionSpring, Collins Yeboah Asomani told the media, VisionSpring is looking forward to implementing other key Corporate Social Responsibilities going into 2022 to bring eyecare to the doorstep of deprived communities in Ghana.