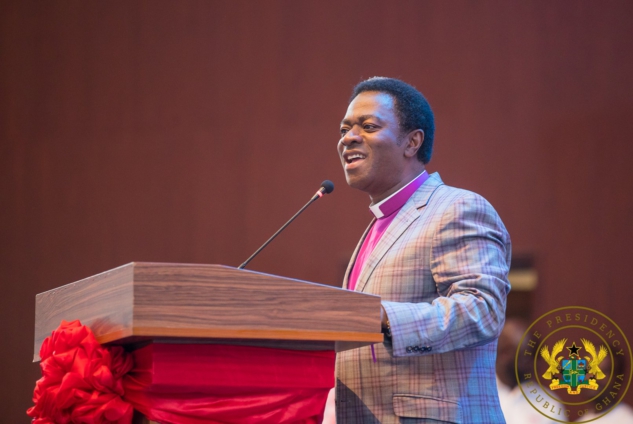 Some Ghanaians on social media are having a field day over a sermon preached at the thanksgiving service held by the New Patriotic Party on Sunday to mark its 30th anniversary.

Seated in the front row of the University of Professional Studies Accra (UPSA) auditorium were top officials of the NPP including President Akufo-Addo during which the preacher for the day had some strong words for the congregation.

The event was held under the theme, “NPP@30: Our shared tradition, holding and working together a stable and prosperous nation.”

“What language do you have, is it a selfish language or a language that will develop the nation Ghana. If our focus is for ourselves, only I, me, myself, at the end of the day, we will fail and the nation will fail,” he said on Sunday.

Dr Kwabena Donkor called out stakeholders including political parties to eschew sloganeering and put in the work in togetherness if the country is to see any meaningful development.

“If you have the men, without unity you don’t have the might. Listen, because if the men are there and the men are not united, they will not give you their brains. The party will suffer and the nation will suffer,” he preached amid cheers from the auditorium.

Ghanaians on social media believe the sermon was conspicuously blunt and bold.

I think the organisers brought in the wrong speaker.
See their faces..😂😂😂😂 pic.twitter.com/QSlFHiNBiF

The preacher may agree to this as he admits midway that “maybe you called the wrong person to speak today.”

Twitter has been awash with reactions from Ghanaians since snippets of the sermon went viral.

Find some of them below.

Boldness on a different energy. https://t.co/boUAJgOyhQ

[WATCH]: President Akufo-Addo and the NPP visited the Christ Apostolic Church of Ghana for their thanksgiving service, as part of the party’s anniversary celebrations.

It’s the evident the pastor had waited all his life for this moment. Press Play. 🤣😭 pic.twitter.com/NJmWKCDSUz