A Zimbabwean-born academic who taught herself to read from her brother’s schoolbooks says she was shocked to learn that a life-size statue of her would be unveiled in the US.

“I’m just so humbled – it is unbelievable,” Tererai Trent told BBC Focus on Africa. “Can you believe I am standing so tall in New York City?”

“We know that 3% of statues in the city are female,” Ms Trent said. “My great-grand-mother, my grandmother, my mother – ha! – they would never have dreamt of something like this.”

I’m deeply honored to be one of 10 bronze statues of women by@GillieandMarc for their #StatuesforEquality project. You can see the statues at 1285 Avenue of the Americas in NYC and read more about the project here: https://t.co/lucvZPjMLX pic.twitter.com/xj2Y53y6D7

They were chosen as part of the Statues For Equality project by sculptors Gillie and Marc Schattner.

The husband-and-wife duo says the installations of inspirational women are an attempt to balance gender representation in public art.

But Ms Trent’s focus is on collective progress rather than individual triumph.

“There were so many things that shaped the denial of education for young women like me – poverty being one of them, and the colonial system that never valued education,” she said.

Growing up in rural Rhodesia – as Zimbabwe was then called – she noticed a key divide from early on.

“In the whole village, only men could read and count, and the majority of women could not. And yet some of these were brilliant women,” Ms Trent told the BBC.

Her grandmother, in particular, was a talented midwife.

“I always say that if she had had an education maybe she would have become one of the best gynaecologists in my community, if not the whole world.” 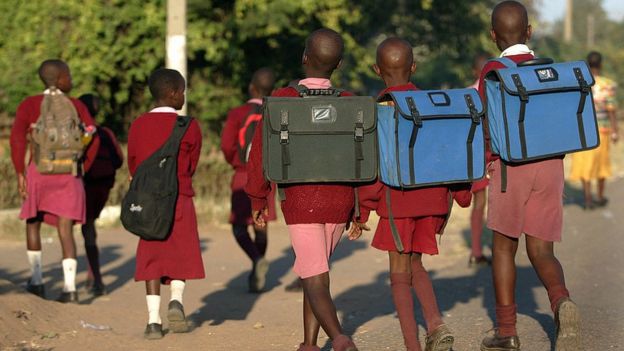 When the time came for children to go to school, it was Ms Trent’s brother who went, not her.

“It was a strategic decision to educate boys. Parents were looking at – of these two genders – who is more likely to get employed in the factories and mines and bring money home?”

But seeing her brother’s schoolbooks sparked something in her.

“I was fired up. I really wanted to be able to read, seeing these pictures and these words.”

Once she had got her brother to teach her the alphabet, she continued to teach herself, and it opened up her world.

“We never had books based on Rhodesian or Zimbabwean experiences – they were all from Britain or elsewhere. And I wanted to go to those places! But, I went there through the books I was reading,” Ms Trent said.

Those early experiences mean she is committed to giving back to women and girls in communities like hers.

“We have a moral obligation, those of us able to achieve our dreams, to help others stand on our shoulders and provide that opportunity.”

Ms Trent went on to earn her PhD in the US, where she is now a teaching professor in health at Drexel University, and also formed Tererai Trent International – a foundation which seeks to provide quality education in rural communities in Zimbabwe.