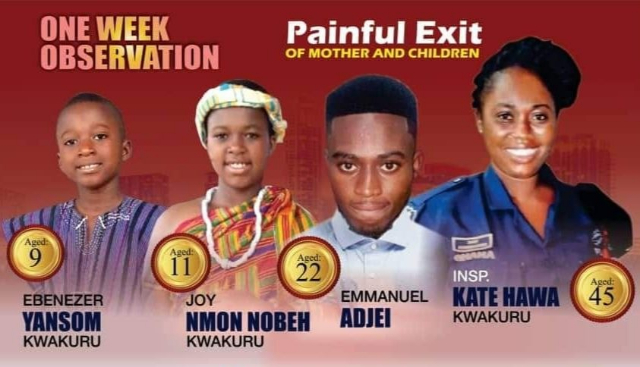 Brother-in-law of a police inspector who died in a gas explosion has disclosed that the 11-year-old daughter of the officer tried to save her mother with a basin of water.

Seth Nyantakyi Baalah said unfortunately, Joy Kwakuru was also caught up in the flame which led to her death.

Speaking to Joy News’ Maxwell Agbaba at the one-week commemoration of the sad incident at Ablekuma, which almost wiped out the entire nuclear family has left them traumatised.

The only surviving member of the family was the husband of the deceased.

Narrating what happened, he said Kate Hawa Kwakuru, 45, died last week Sunday when a gas cylinder at her home exploded whilst she was in the kitchen.

Inspector Kate had returned from church and decided to cook for her kids but she realised the gas was almost finished and sent somebody to go and fill the gas.

After waiting for some time, she decided to use a coal pot to prepare the food since they were all hungry. After the person sent to fill the gas came back, she smelt some gas leakage and called her first son, Emmanuel to take the cylinder outside.

However, her son when coming out with the cylinder used the direction where his mother was cooking with the coal pot and that caused the unfortunate incident.

“The woman and her son got burnt instantly because gas was around them. Then Joy got fresh water and poured it on her mother who was burning thinking she could save her. In the process, the flames caught up with Joy too.

“The youngest of her children, Ebenezer who was around also run into his mother’s arms and the fire spread to him,” he narrated.

“The following day, [Monday] Kate passed away, on Wednesday, Emmanuel also died, on Friday, Ebenezer also died on Saturday and we were all praying if we could have Joy to be here. On Sunday, night [January 12], Joy passed away,” he added.