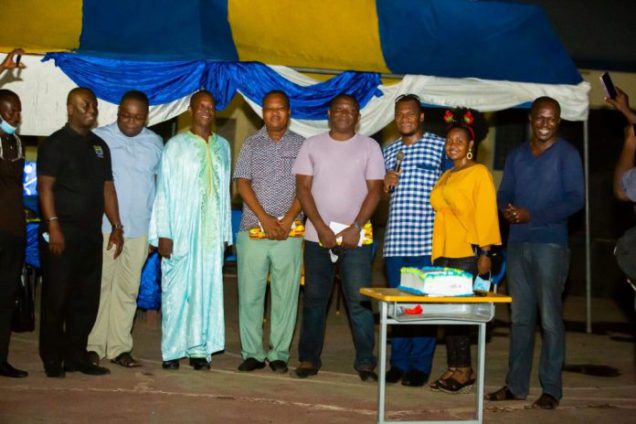 Two retired tutors of the St. John’s Grammar School, Achimota, and a serving tutor were on Monday, December 27, 2021, honoured by the 1997 graduating class.

They are a former Physical Education teacher, M Brown Hushie and a former Mathematics teacher, Joseph Darko as well as Victor Guddah, who teaches English Language in the school.

They received undisclosed cash and some parcels in appreciation for the positive impartation they made on the lives of the group, who completed the school some 24 years ago.

Mr. Hushie on behalf of his colleagues was full of appreciation to the 1997 year group for remembering them even in retirement.

He was happy to see that members of this graduating class had moved on to become responsible citizens occupying high positions in the country.

The induction was done by the national President of Josa, Louis Mawuena Hiagbe, who charged the new executives to collaborate with the mother association for the development of the alma mater.

The national President indicated in his address that, there were intended projects including the construction of a new science block among others that cannot be undertaken by any single year group.

Rev Hiagbe, therefore, used the opportunity to encourage all-year groups to come on board to ensure these achievements and also enhance discipline in the school.

In a short remark the outgoing president of the group, David Youngs called on members to get involved in the activities of the group to make it become more vibrant.

He also urged members to take good care of themselves and refrain from things that would have a toll on their health and well-being.

Mr. Bernard Danquah on his part thanked members of the 1997 year group for the confidence they have in the new executives and subsequently voted them into office.

He pledged closer collaboration between the general body and the executives in order to promote the activities of the group and as well as the interest of the school.

The group observed a minute of prayer in remembrance of some of their departed colleagues.

DISCLAIMER: The Views, Comments, Opinions, Contributions and Statements made by Readers and Contributors on this platform do not necessarily represent the views or policy of Multimedia Group Limited.
Tags:
1997 year group
St. John's Grammar