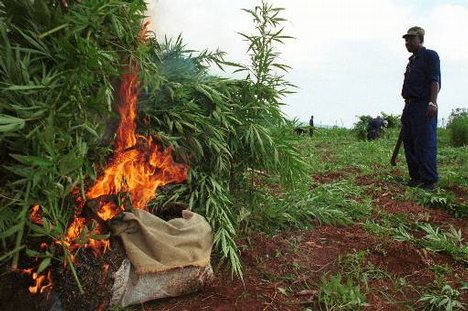 Over 200 acres of Indian hemp were destroyed by the police between 2014 and 2015, while 50 tonnes were also impounded.

The Director-General of the Criminal Investigations Depart­ment, Commissioner of Police (COP) Prosper Kwame Agblor, revealed this at a press briefing following the arrest of a man al­legedly in possessing of 188 kilo­grammes of dried leaves suspect­ed to be wee.

He said the Drug Enforce­ment Unit of the CID, as part of its on-going anti-illicit drug programme, conducted an intel­ligence-led operation at Nima on February 29, this year, during which the suspect, Kwame Dook was arrested.

COP Agblor said, investigations so far has revealed that Dook and other accomplices formed part of a drug trafficking network in the country.

He stressed the unit is determi­ned to fight narcotic drug traf­ficking in the country.

As you are aware, drug abuse has social and economic reper­cussions and poses a threat to public health security, and so my outfit would do its best to come up with measures to curb the menace, he said.

The CID boss explained that drug abuse affected the human capital base of the country, and contributed to low economic productivity and increase in the crime wave.

He encouraged the public to continue to volunteer informa­tion to the police for arrested perpetrators to face prosecution.