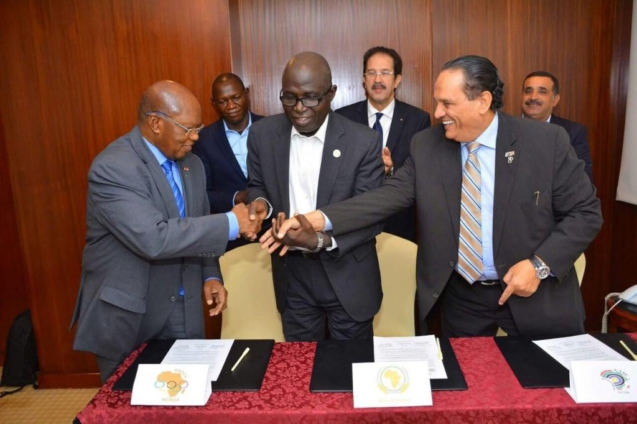 The Association of African Sports Confederations (UCSA) has threatened to boycott the 2023 African Games in Ghana if disagreements over marketing rights for the competition are not resolved by the end of September 2022.

UCSA, the body responsible for providing technical officials for the games, has also resolved to discontinue any further engagements with the African Union Social Affairs, the department of the AU responsible for the organisation of the games.

The resolutions were contained in a letter signed by UCSA General Secretary Emad El Bannany and President Major General Ahmed Nasser, following an Extraordinary General Assembly held on 25th August, 2022, a copy of which Joy Sports has obtained.

An UCSA boycott would make it impossible to stage the games next year, putting Ghana’s organisation of the competition in further jeopardy.

The Association of African Olympic Committees (ANOCA) had also previously suggested it will reserve the right to organise its own qualifiers for the Olympic Games in Paris, taking that privilege from the 2023 African Games.

Already, the country is struggling to meet timelines for the delivery of infrastructure for next August’s competition, while the timing of the games also makes participation tricky for the continent’s top athletes.

That agreement was signed in February 2018, with the organisations claiming the move would lead to an increase in quality and competitiveness of the Games, as well as improving revenue, sponsorship and marketing.

The AU subsequently set up a committee – Technical Committee for the African Games (TCAG) to run the competition.

However, the AU signed a separate agreement with host country Ghana, in the build-up to the 2023 games, an agreement both UCSA and ANOCA claim has stripped them of many of their rights from the 2018 agreement and that they have now been reduced to ‘third parties’.

President Akufo-Addo was forced to intervene in trying to find an amicable resolution to the dispute after ANOCA and UCSA threatened to not provide officials for the games, which would also ultimately affect the games’ attraction as a qualifying event for the Paris 2024 Olympic Games.

He instructed the three parties to meet and find a middle ground that will ensure the games go ahead without problems.

On top of that, both parties have also proposed a revenue sharing module for how monies from the games will be distributed among the host country, AU, ANOCA and AASC.

In a planned virtual meeting between the LOC, ANOCA, UCSA and AU, to consider the proposed resolutions, AU did not show, with UCSA and ANOCA accusing the AU of “neglecting the tri-partite agreement and declining the offer of corporation.”

In an ANOCA General Assembly held in April and chaired by the organisation’s President Mustapha Berraf, ANOCA said the AU signing a second contract with Ghana was “illegal and irreverent behaviour of the AU institutions and administrative officials” and also accused them of “refusing to engage, contrary to the international rules for the organisation of multi-disciplinary Games”.

Not the first time

InsideTheGames reports that “the dispute draws comparison to a dispute in the build-up to the 2015 All-Africa Games in Brazzaville.”

The event was organised by the Sports Council of the AU, after talks with ANOCA broke down.

The dispute meant the Games did not serve as an Olympic qualifier, reducing the interest among athletes.

The 2016 agreement between the three parties around the Games appeared to have given the event stability.

Next year’s African Games are expected to take place on 4-19th August.

It will be the first time Ghana has hosted the continental event.