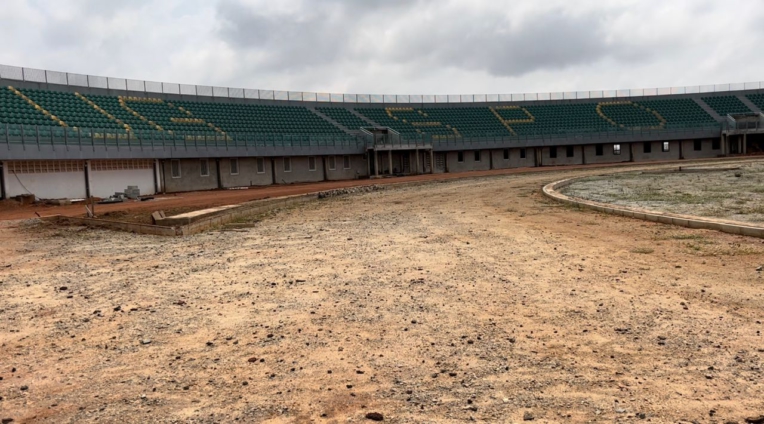 The opening ceremony of the 2023 African Games is less than twelve (12) months away, but organisers are racing against time to put adequate infrastructure in place to host the multi-sport event.

Ghana was awarded the rights to host the 13th African Games back in 2018. At the time, the country conceived the idea of hosting the games in three cities – Accra, Cape Coast and Kumasi. But the African Union Sports Council (AUSC), the organization in charge of the games, kicked against the multi-city approach, preferring to concentrate the games in one city, in line with previous traditions.

In November 2020, over two years since being awarded the games, government finally announced plans to construct a 50,000 Olympic Stadium at Borteyman to serve as venue for the competition. President Nana Akufo-Addo said the stadium was to be converted into a University for Sports Development post the competition.

But eight (8) months later, those plans were shelved and government instead adopted a hybrid approach that would now see the yet-to-be-completed Legon Sports Stadium serving as the centre of the games, and a sports complex constructed at Borteyman to host some of the events. Government cited budgeting and time constraints for the decision.

The Borteyman Complex will host an aquatic centre, with a warm-up and competition pool that can seat up to 1000 people.

There will be five tennis courts, including a centre court that can seat up to 1000 spectators. Three multi-purpose sports halls will house indoor sporting events such as basketball, badminton, table tennis, volleyball among others.

“I’m confident that Ghana will host the best ever African Games in history,” Akufo-Addo said at the sod-cutting ceremony for the Borteyman Complex.

The President had good reason to be positive when he made those remarks in August 2021. It was exactly two years to the games and a month prior, government had sought a 170 million dollar loan from Cal Bank to finance the project.

But the bank had major challenges sourcing the money and the deal fell through.

Government instead, apportioned 140 million out of the 750 million dollar loan from the African Exim Bank to the project.

“We had a financial arrangement with CAL Bank but there were few challenges in getting the money to the contractors to keep them on track of the timelines, but government stepped in to ensure work continues,” Youth and Sports Minister, Mustapha Ussif, told Joy Sports.

“I believe as long as we get the funding right, the project will be delivered on time for us to host the games,” he said.

“We are looking forward to getting the needed funding to get the job done but funding doesn’t come from us it comes from Government…we are to have $140 million [from Ghana Government] going towards infrastructure. That’s for infrastructure. We haven’t even looked at operational cost, procurement and what have you so a lot of money is involved if you are hosting the Games,” Chairman of the Local Organising Committee, Dr. Ofosu Asare, told Joy Sports.

When Joy Sports visited the site for the Borteyman Sports Complex on August 17, 2022, construction appeared to be at the starting phase, with the foundation of many of the facilities yet to be erected.

“In my view, if we don’t get the money on time, it is going to affect the timelines for the games,” Ofosu Asare said.

Organisers have approved 23 sporting disciplines for the 2023 African Games, out of which, 21 will be held at the Borteyman sports complex, with athletics and rugby scheduled for the Legon Stadium.
Work is progressing on the Legon Stadium, whose construction began in 2004 but has faced persistent delays.

Majority of the work on the stadium has gone into fixing the seats, but many vital aspects of the facility, like the tracks, remain a long way from completion.

Apart from the stadium, which will host track and field events, there is also a new 8-lane warm-up track being constructed, as well as a brand new rugby field.

Construction has begun on both of those last two new facilities, but the work that remains appears enormous.

Perhaps the biggest concern for organisers is the games’ village.

Ghana has opted against putting up new infrastructure to accommodate the over 5000 athletes and officials that will come from the 54 African countries participating in the games.

Instead, residential facilities at the University of Ghana (Limann Hall), have been earmarked to serve as the Games’ Village, but even those will require major upgrades to meet the competition standards.

“The games require that we put air conditioning in the rooms. We also need to install water heating systems, put a security wall, dining facilities as well as a medical centre. These are all things we need to do before it can be accepted as a games’ village,” Ussif said.

Apart from the infrastructural and operational challenges, a major disagreement over marketing rights between the African Union (AU), the Association of African Olympic Committees (ANOCA) and Association of African Sports Confederations (AASC) – three organisations that usually collaborate for the games – is threatening the delivery of the games.

Before the Rabat Games in 2019, AU signed an agreement with ANOCA and AASC that allowed AU to set up a committee -Technical Committee for the African Games (TCAG)- to manage the marketing rights of the games. That agreement was signed in February 2018 and was supposed to be a ‘one games only’ agreement.

However, during the signing of the protocol agreement between Ghana and the AU, those rights were ceded to the host country.

President Akufo-Addo was forced to intervene in finding an amicable resolution to the dispute after ANOCA and AASC threatened to not provide officials for the games, which would also ultimately affect the games’ attraction as a qualifying event for the Paris 2024 Olympic Games.

On top of that, both parties have also proposed a revenue sharing module for how monies from the games will be distributed among the host country, AU, ANOCA and AASC.
In a planned virtual meeting between the LOC, ANOCA, AASC and AU, to consider the proposed resolutions, AU did not show up, with AASC and ANOCA accusing the AU of “neglecting the tri-partite agreement and declining the offer of corporation.”

As a result, the parties are currently at a standstill as no resolution has been found.

The 2023 African Games has been scheduled for August 4-19, a 15-day period that will see all of Africa’s top sporting talents converging in Accra to compete for honours.

But for track and field athletes, they would be thinking twice about making the trip to Accra.

The 2023 World Athletics Championships in Budapest will start on August 19, the same day the African Games would come to an end.

Are Africa’s top athletics talents willing to risk a burnout by competing in Accra just before Budapest, or will they be forced to prioritise one competition over the other? How many of them will choose the African Games over the World Champs?

Both the Minister of Youth and Sports and the LOC Chairman were in Birmingham for the 2022 Commonwealth Games to pick notes on how the English city pulled off the multi-sport event.
“If you had the opportunity to visit Birmingham, you would have seen that even they couldn’t finish all of their facilities for the games. So I am telling you that unless there is a force majeur, the games will come on,” Ussif assured.

While the minister remains steadfast in his belief that the games will come on, the LOC Chair is a bit more circumspect, pinning his assurances on the availability of funds to complete projects.
“Even if we couldn’t finish Borteyman and we were considering putting temporary structures at alternative venues like the Independence Square or the Bukom Boxing Arena, we would still need money to finish them.

“Hosting these games would bring huge economic benefits to Ghana and the Accra Metropolitan Assembly must take interest in it as well,” he said.

DISCLAIMER: The Views, Comments, Opinions, Contributions and Statements made by Readers and Contributors on this platform do not necessarily represent the views or policy of Multimedia Group Limited.
Tags:
2023 African Games
Dr. Ofosu Asare
Mustapha Ussif