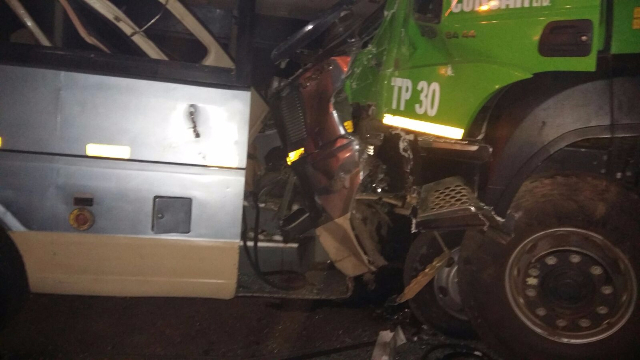 Three people are feared dead with some 13 others severely injured in a car crash on the Kumasi-Obuasi road in the Ashanti region.

The incident happened on a stretch of road between Trede and Pekyi number 2 around 6:00pm, Wednesday.

According to an eyewitness, a Yutong bus which was heading to Obuasi collided with a Kumasi bound Consar construction truck.

The bus had overtaken another vehicle shortly before the accident.

The three people according to the eyewitness died instantly but some of the thirteen injured persons are said to have lost parts of their bodies including arms and legs.

Nhyira fm’s Akosua Addai Osei Tutu reports that the police and fire service are currently at the scene, conveying the injured to the hospital and the dead bodies to the morgue.

The vehicles which have reportedly caused traffic jam at that stretch of the Kumasi-Obuasi road is being towed off the road.