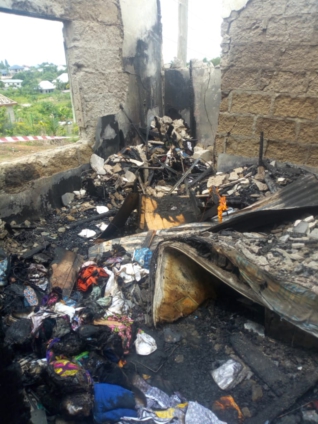 Three siblings – one boy, and two girls – have burnt to death at Sefwi Bibiani-California also known as Gyidimu in the Bibiani Anhwiaso Bekwai Municipal in the Western North Region.

Uncle of the deceased, Oti Mensah Joseph who spoke to Adom News’ Augustine Boah, described the incident as shocking.

According to him, he takes care of the children during the day and only returns them to their parents at night.

He said it was around 10 pm on Wednesday, that he received a call with the news of their death.

Mensah Joseph was told a fire had gutted his sister’s apartment resulting in the death of all the three children.

“When I got there around 10:55pm, the children were already dead. It was very sad. One is four-years-old, the other is three-years-old and the youngest is just 11-months-old. While my sister escaped with limited injuries, her husband who tried to rescue the children got hurt.

“All their properties got burnt. I have my younger sister staying with them and she also lost everything. The room after theirs also got burnt,” he told Adom News.

Assemblyman for the Electoral Area who is also a close relative of the family, Samuel Kwagyiri tells Adom News, residents are still in shock.

According to him, the mother’s cry for help attracted residents who tried to rescue the children.

“It was around 10:45 pm that I heard of the fire. By the time I got there, everything was burnt.

“The mother was in the house with the children who were sleeping in the bedroom. The husband had gone out to buy something when the fire started.

“The smoke came from the bedroom where the children were sleeping. By the time she noticed it, the bedroom was on fire, so she rushed out for help. The people who came around to help could not rescue the children because of the heat.

“It was the father of the children who asked to be covered with a wet blanket so he can go and rescue his children but he couldn’t and he also got burnt in the process.”

Meanwhile, the parents, Stella and Unas Ducan have been admitted at the Bibiani Government Hospital where they are undergoing treatment.

The deceased have also been deposited at the hospital morgue.

DISCLAIMER: The Views, Comments, Opinions, Contributions and Statements made by Readers and Contributors on this platform do not necessarily represent the views or policy of Multimedia Group Limited.
Tags:
burnt
Sefwi Bibiani