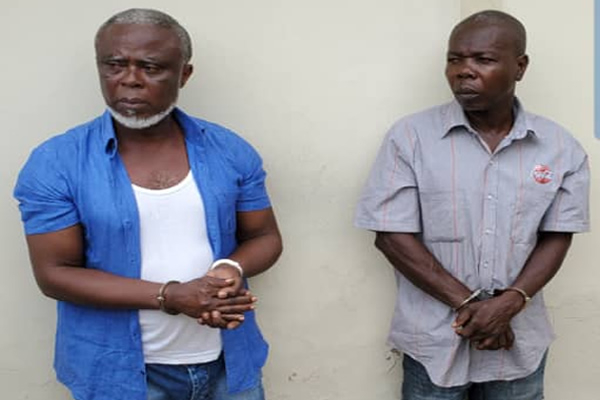 State prosecutors have charged nine persons with treason felony for allegedly engaging in an “elaborate plot” to destabilise the government.

Two other persons, personnel of the Ghana Armed Forces, Lance Corporals Godwin Nii Ankrah and Albert Baba Ibrahim, have meanwhile been discharged by the court after the state dropped charges against them.

The suspects charged with first-degree felony are;

-Gershun Akpa –  a civilian employee of the Armed Forces.

Defence lawyer, Victor Adawudu, told the court the charges are trumped and demanded that the accused persons are discharged.

He alleged that a man whose name he only gave as Sulley is the brain behind the plot to frame his clients.

The defence lawyer said the charges filed by the state cannot be heard at the district court. Other defence lawyers associated themselves with Mr Adawudu’s application.

But rebutting, state prosecutor ASP Sylvester Asare said the concerns by the lawyers are misplaced and insisted the state is at the right forum commencing proceedings against the accused persons.

He said the case will eventually end up in a trial at the high court.

ASP Sylvester Asare rejected the claims of framing the suspects. He said he found it disturbing but insisted taxpayers money will not be wasted to set people up.

The Magistrate presiding over the Kaneshie District Court Rosemond Dodua Agyiri dismissed the application saying the District Court has jurisdiction since its not a trial court but rather handling committal proceedings.

The court has meanwhile directed that the soldiers among the charged persons be kept in military custody while the civilians were remanded into police custody (Ministries, Osu and Nima Police Stations).

This followed allegations by lawyers that the Bureau of National Investigation (BNI) has failed to grant them access to their clients as ordered the court. The case has been adjourned to October 28.

‘Plan to destablise the government’

The government in a statement released last month said a joint security operation led to the retrieval of several cache of arms, explosive devices and ammunition from locations in Accra and Kpone-Bawaleshie in Dodowa.

The charge of possession of explosives, arms and ammunition without lawful excuse was then levelled against some of them.

According to him, they intended to engage in a series of demonstrations geared at toppling the government.

He revealed they have since secured the services of one other person already in custody to produce explosives and guns for the operation.

Payments amounting to ¢2,300  according to prosecution were made for the six pistols while ¢400 has since been paid for some explosives.

The state prosecutor also said the senior military officer was asked to recruit other soldiers for the operation. He said they planned to take over key installations including the Jubilee House, Ghana Broadcasting Corporation, National Police training school, the 37 Military Hospital and Burma Camp.

These facilities, he said, were part of locations sketched on a map to be used for the operation.

He said Dr Mac-Palm gave the other accused persons chemicals to be mixed with the explosives to put victims to sleep for at least an hour once they inhale the smoke emanating from the detonated explosives.

DISCLAIMER: The Views, Comments, Opinions, Contributions and Statements made by Readers and Contributors on this platform do not necessarily represent the views or policy of Multimedia Group Limited.
Tags:
Alajo coup plot
Ghana Armed Forces
Treason