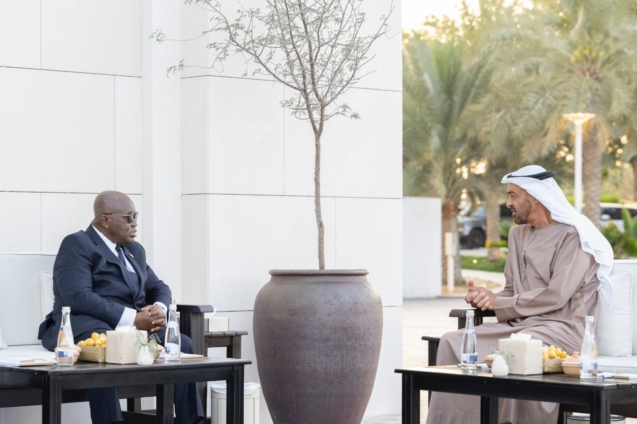 Crown Prince of Abu Dhabi and Deputy Supreme Commander of the UAE Armed Forces, His Highness Sheikh Mohamed bin Zayed Al Nahyan has met President Akufo-Addo to review the prospects of advancing the relations between the two nations.

Sheikh Mohamed President Akufo-Addo at Al Shati’ Palace in the UAE Capital city of Abu Dhabi. Akufo-Addo is on a working visit to the UAE, during which he attended Ghana Day celebrations at the Expo 2020 Dubai.

The two leaders discussed partnerships in the fields of trade, investment, agriculture, and energy, among others, in addition to a number of international and regional issues of interest between Ghana and the UAE who are both serving on the United Nations Security Council as non-permanent members for this term.

Sheikh Mohamed conveyed to Akufo-Addo the greetings of UAE President, His Highness Sheikh Khalifa bin Zayed Al Nahyan and his wishes of continuing stability and development to the Republic of Ghana. He also renewed his congratulations on the National Day of Ghana wishing the country more progress and prosperity.

For his part, President Akufo-Addo thanked Sheikh Mohamed for the warm reception, stressing the depth of the UAE-Ghana relations and Ghana’s keenness to further advance cooperation over the coming period.

DISCLAIMER: The Views, Comments, Opinions, Contributions and Statements made by Readers and Contributors on this platform do not necessarily represent the views or policy of Multimedia Group Limited.
Tags:
Crown Prince of Abu Dhabi
President Akufo-Addo