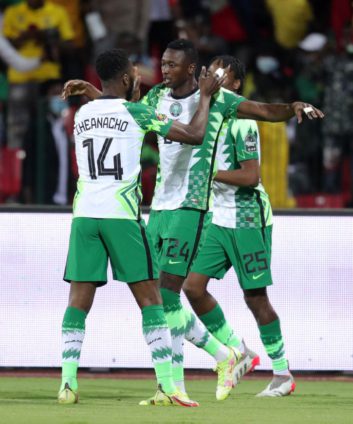 Nigeria finished their group stage campaign in the ongoing Africa Cup of Nations with a 2-0 victory over Guinea Bissau as they kept their winning start to the competition.

Prior to their final group game, the Super Eagles had won their opening two games, beating Egypt and Sudan, scoring four goals in the process and conceding once.

On Wednesday, goals from Umar Sadiq and William Troost-Ekong were enough to ensure they finished in Group D as winners after winning all three games.

Egypt also recorded a 1-0 win over Sudan in the other group game as Mohamed Abdelmonem’s trike in the 35th minute was enough to give the Pharaohs all three points.

Midweek’s win ensures a second-place finish for the north African side in Group D.

Nigeria and Egypt join Cameroon, Burkina Faso, Senegal, Guinea, Morocco and Gabon in the next round of the continental showpiece.