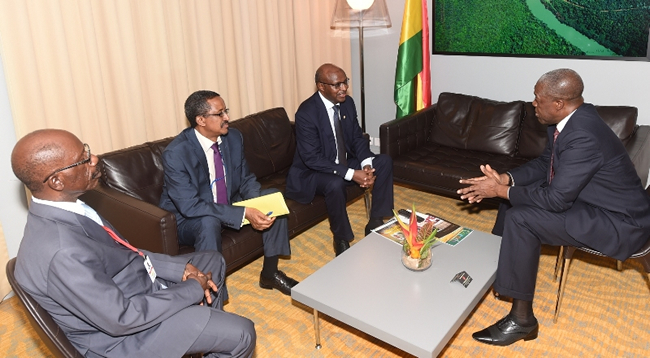 Vice President Kwesi Amissah-Arthur has called on African governments to confront head-on the problem of youth unemployment, which he said has the potential to cause mass social unrest and agitation on the continent.
According to him, the issue of youth unemployment is getting worse with each passing year and remains a blot on the conscience of African governments in the midst of economic achievements.
Vice President Amissah-Arthur made the call when an Ethiopian delegation led by its Finance Minister, Mr Sufian Ahmed called on him at his hotel in Abidjan.
Mr. Ahmed is among the contestants vying for the position of the President of the African Development Bank, which is also holding its Golden Jubilee celebrations in the Cote d’Ivoire capital.
Vice President Amissah-Arthur told the delegation that the broad masses of the people, especially the youth are looking beyond statistical evidence of progress in their lives which among others are the creation of job opportunities for them.
He said the fragile economies of African countries which most often are exposed to shocks on the global economic environment results in the dwindling of receipts from export commodities thereby making it increasingly difficult to deal resolutely the dodgy question of youth
unemployment.
He explained that government cannot keep on postponing the issue of creating viable opportunities for the youth to take advantage of.
Vice President Amissah-Arthur also pointed out that African governments are duty bound to offer the youth more hope for the future by finding the most appropriate ways in transforming their talents to benefit them and the economy of their countries.
Mr Ahmed traced the historical bond between Ghana and Ethiopia to the days of Ghana's First President, Dr Kwame Nkrumah and Emperor Haile Selassie.
He commended Ghana's role in the liberation struggle of Africa and the strides to deepen democracy and good governance on the continent.
The Ethiopian Minister shared the sentiments of Vice President Amissah-Arthur on the issue of youth employment, adding that the issue if not properly dealt with could cause social unrest on the continent.
This, he said, could roll back the modest gains of economic development and the social improvement in the lives of the people which many governments have chalked out on the continent.
He prayed Ghana to use its influence to leverage other countries especially in the West African sub-region to endorse him as the next President of the African Development Bank.