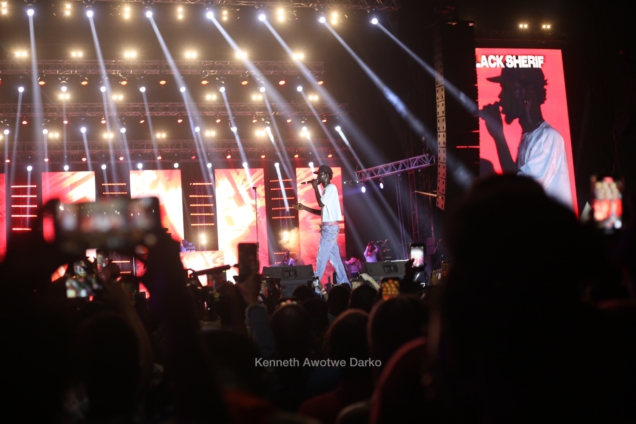 Ahead of go-time, many had already projected a packed Marine Drive as the only major competing show, had ended a day prior.

They were not wrong. Day 2 of Afro Nation was all fun for the patrons who were early birds. The stage was buzzing with energy as musicians took turns to serve them thrills on Friday.

Camidoh and KiDi provided scintillating performances. Black Sherif, also brought on a spirit-filled introduction and rode the tide until his time was up. It was a charged atmosphere that greeted Stonebwoy’s act as well.

🎥 #Afronation2022 ended abruptly after a breach of security. A video of MCs briefing the crowd why the show had to stop. #AfroNationGhana #afrochella2022 #Afronation pic.twitter.com/HM5wd0LjsR

However, as it neared midnight the gates of Afro Nation did not see the same level of excitement. The only energy at the entrances was chaos.

Pushing, pulling and shoving was a common sight as against the earlier-orderly process that ushered in Day 2 of the show.

The pressure from the mammoth crowd outside grew too intense for the guards to handle.

The were multiple instances of near-stampedes with dozens included women sustaining injuries in the process.

Dadju’s performance came off nonetheless. Amid the wailing of regretful revelers, some claiming to be VIP holders battled for their lives just for a chance to see Asake or Skepta.

There were also brief stand-offs between frustrated ticket holders and some security personnel putting pressure on the barricades.

News of the disturbing incidents finally reached the top hierarchy of the concert’s managers.

There was a long break after Dadju’s set as the show organisers tried to get the situation under control.

Eventually, one of the MCs Eddie Khadhi announced that the show was over due to the rate at which things have escalated.

He was in the company of co-MC Shopsydoo and Afro Nation co-founder, Smade.

DISCLAIMER: The Views, Comments, Opinions, Contributions and Statements made by Readers and Contributors on this platform do not necessarily represent the views or policy of Multimedia Group Limited.
Tags:
Afro Nation
Afro Nation 2022