Akomea: Next year by this time Ghana will be swearing-in Nana Akufo-Addo 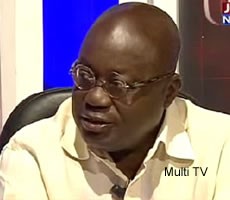 Exactly a year by this time Ghana will be swearing in its new president in the person of Nana Addo Dankwa Akufo-Addo.

This is according to the New Patriotic Party head of Communications, Nana Akomea.

He was speaking on the first edition of the news analysis programme Newsfile on MultiTV/Joy FM in the year 2012.

In what were his preliminary comments on the upheavals in the CPP, the NPP’s lynchpin could not resist the temptation of shoring up the confidence of his party men, particularly when the day, 7th January coincided with the day the new president after the 2012 elections will be sworn in.

“Next year by this time Ghana will be swearing in Nana Akufo-Addo for a decisive, courageous, and transformational leadership,” he touted, whilst shedding tears for the CPP which he said he “feels sorry for.”

He said after clamouring for a “magical name, CPP”-that was banned for many years- and which they believed was the panacea to the waning fortunes of the Nkrumaist tradition, they finally had that magical name but continue to wallow in obscurity.

He is convinced the major “dislocation” in the defection of Dr. Papa Kwesi Nduom from the CPP will in no small way affect the fortunes of the CPP.

Asked if the NPP will court Nduom’s Progressive People’s Party in the likely event of an election run-off in December, Nana Akomea responded in the affirmative saying “Why not? Nduom is our man we will not have any problems getting him to support us.”

David Ampofo, a campaign advisor to Dr Papa Kwesi Nduom who was also on the show said he is “fascinated” by the confidence with which Nana Akomea could boldly declare Nana Akufo-Addo as the new president in 2013.

He would not say same for the breakaway Progressive People’s Party, but said the party will work hard hoping “conspiracy of circumstances” will be in their favour.