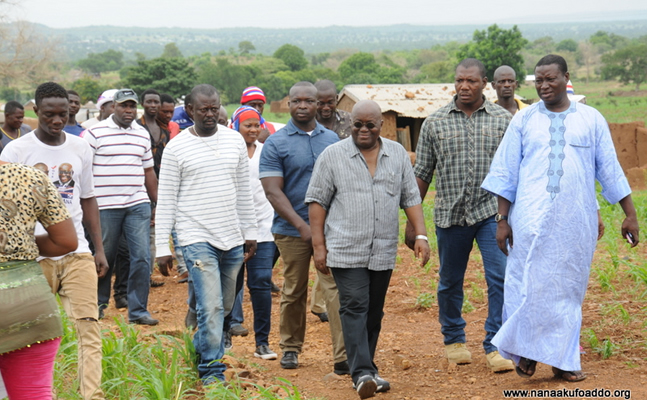 Nana Addo Dankwa Akufo-Addo has urged the electorate in Talensi to vote for the New Patriotic Party’s candidate for the July 7 by-election, Thomas Doanab, as this will be a vote in honour of the Paramount Chief of Talensi, Tongo-Raana Kolbilsong Namalteng, who is also known in private life as Robert Nachinab Mosore, the NPP’s immediate past Member of Parliament for the constituency.

The NPP’s 2016 presidential candidate made this known on Friday, July 3, 2015, when he campaigned in Gbane, Duusi and Sheaga, all in the Talensi constituency, ahead of next Tuesday’s by-election.

According to Akufo-Addo, “by voting for Thomas Doanab, you will continue to honour the legacy of Robert Mosore.”

Ghanaians, and indeed the people of Talensi, he said, have had enough of the suffering imposed on them by the Mahama-led NDC government, and as such are in desperate need of a change in government.

He assured the constituents of Talensi that “the NPP is coming back to power not to steal your money. That is not why we are coming to power. The NPP is coming because we have a plan to develop this country, so we can bring progress and prosperity to all parts of Ghana. We are coming so the young people of our country can get work to do and our farmers can be strong again.”

To bring this to fruition, he maintained that “we have the men and women who can give this country a first class government”, stressing that “I am not in politics to put money in my pocket, that is not why I am in politics. We are coming into power to help develop this beautiful land. We are entitled to be a prosperous nation, not a poor country.

On the NPP’s candidate for the by-election, Mr. Thomas Doanab, popularly known as ‘Home Boy’, Nana Akufo-Addo urged the constituents to vote for him because he is “an honest and competent man and he’ll be a good representative of yours in parliament.

Visit to Chiefs and opinion leaders

Nana Akufo-Addo, together with his team, and prior to hitting the campaign trail, paid a courtesy call on the Paramount Chief of Talensi, Tongo-Raana Kolbilsong Namalteng, to inform him formally of his presence in the constituency, as he campaigns for Thomas Doanab.

He introduced the NPP’s candidate for the by-election to the gathering, and in the presence of the Paramount Chief stated that “your legacy requires that Thomas Doanab wins on Tuesday. That is what will bring you glory.”

The Tongo Raana, on his part, thanked Nana Akufo-Addo and his team for their visit, stating that though all the parliamentary candidates are his “children”, what the people of Talensi need is “an MP who will follow in my footsteps.”

Earlier in the day, Nana Akufo-Addo also called on the Chiefs of Gbane, Sheaga and Dusi, where he also introduced the NPP’s candidate to them.