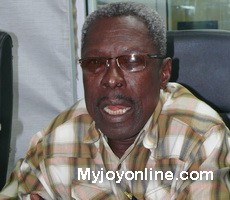 The Director of Monitoring and Evaluation at the Presidency, Dr. Tony Aidoo has urged the flagbearer of the opposition New Patriotic Party (NPP) to contract the services of a speech therapist for effective communication.

He said Nana Akufo-Addo’s presentation at the Institute of Economic Affairs’ (IEA’s) organized presidential debate in Tamale was not audible.

All the four presidential candidates at the IEA Presidential Debate had the opportunity to elucidate their policies and programmes to enable voters make an informed choice ahead of the December 7 general elections.

According to him, Nana Addo, Sakara and Ayariga were eager to rundown the NDC and thus used every given opportunity to attack the President rather than answering their questions.

Tony Aidoo said even though Nana Akufo-Addo was eloquent, his intonation made it difficult for people to hear him, and that of his body language was as if he was addressing a rally.

He indicated that Dr. Abu Sakara was impressive but his submission “lacked substance”.

The Director of Monitoring and Evaluation at the Presidency added that the CPP candidate kept wobbling and deviated from all the questions asked.

He commended the President, John Mahama, for demonstrating maturity even when asked provocative questions, saying he was apt with his submission.

Dr. Aidoo claimed that President Mahama’s answers became the premise on which the other candidates based their arguments.

He was however not happy about the time allotted for the candidates and urged the organizers to do something about it in subsequent debates.