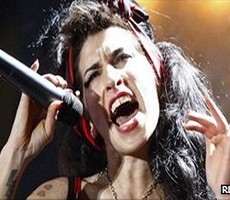 Toxicology results have shown “no illegal substances” in Amy Winehouse’s system at the time of her death, according to her family.

They say tests indicate alcohol was present but it cannot yet be determined if it played a role in the singer’s death last month.

Winehouse’s family thanked police and added that they await the outcome of an inquest on 26 October.

A post-mortem examination took place two days after her death.

The star had had a well-publicised struggle with drink and drugs.

Winehouse’s father Mitch has since announced plans to launch a foundation in his daughter’s name but this has been delayed because the name The Amy Winehouse Foundation has already been registered by someone else.

Shortly after her death, Mitch Winehouse met with senior politicians in parliament to discuss drugs policy and treatment services.

Winehouse’s father told friends and family at the singer’s funeral service that she had been her happiest “for years” in her final days.

A cremation in Golders Green followed a private service at Edgwarebury Cemetery in Edgware, north London, on 26 July.

The singer won widespread acclaim with her 2003 debut album Frank, which saw her nominated for the Mercury prize.

But it was 2006’s Back to Black which brought her worldwide stardom, and won her five Grammy Awards in the US.