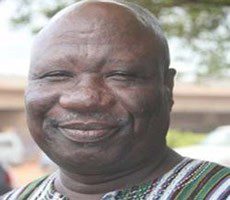 The NPP Member of Parliament (MP) for Upper Denkyira West constituency in Central Region, Benjamin Kofi Ayeh has launched a blistering attack on the Central Regional propaganda secretary of the NDC, Bernard Allotey Jacobs, claiming he is a fetish priest but not a serious politician.

The MP said “Mr. Allotey Jacobs is no serious character to be called a politician because he has metamorphosed from a fetish priest to politician which he knows nothing about”.

This was a reaction from the MP on a statement Allotey Jacobs made on Asempa Fm’s Ekosii-Sen on Wednesday that, the MP is a wanted ‘criminal’ in his constituency.

Mr. Allotey Jacobs claimed the MP had squandered his share of the common fund without using it for the purpose for which he obtained it and that the DCE was pursuing him.

Mr. Allotey Jacobs also accused the MP of faking projects he had not done in the constituency challenging him to go to his constituency to answer for that.

In reaction to the allegations on the Ekosii-Sen programme, Mr. Ben Ayeh described Allotey Jacobs is a character nobody should take serious because “he does not know his left from his right”.

“So this character calling himself Allotey Jacobs is calling me a criminal? I take strong exception to that because he was a fetish priest. I am telling you point blank that he knows nothing in politics because he was a fetish priest then later turned into a nakaba Priest so he is no serious politician. I will pardon him for that. How dare he describe me as a criminal. Does he know my record? I dare him to come again because everybody who knows Allotey Jacobs knows him as either a fetish priest or “nakaba sofo” and not a politician”.

Attempts by the host of the show, Kwadwo Asare Baffuor-Acheampong (KABA) to get the MP retract the statement failed because the MP claimed he had enough evidence. “I am telling you and your station to dissociate yourself from my comment. I know what I am talking about. This man goes around tarnishing people’s image and as for me; he should not dare because I will expose his past”.

The MP however refuted allegations of misappropriating his share of the common fund claiming he used it on projects such as ambulance repairs, computers and other important projects.

”I have used the money well….Those who are doubting can come to the constituency and testify for themselves because I am innocent”, stated.

He accused the District Chief Executive (DCE) of the area of being behind the allegations of misappropriation of funds noting that, it will not deter him from going about his duties as an MP.

In a related development, the DCE of Denkyira, Ackah Yankey also confirmed that he is looking for the MP over an alleged misappropriation of the common fund of the MP.

He said the projects the MP claimed to have used the funds for cannot be found, adding that, attempts to get the MP account for it have proven futile.