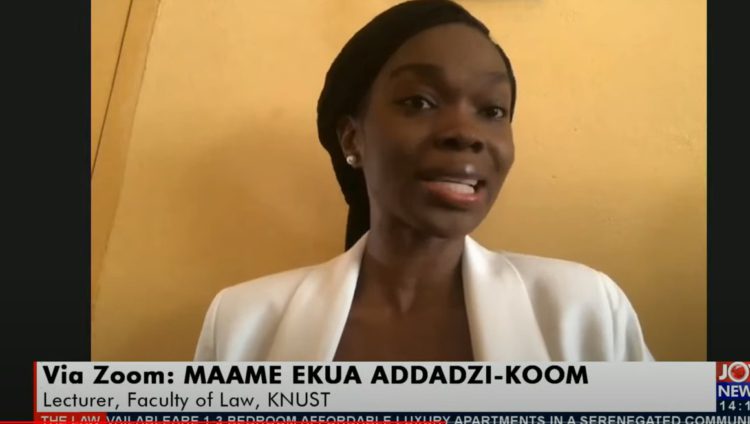 A Lecturer with the Faculty of Law at the Kwame Nkrumah University of Science and Technology (KNUST) has called on Parliament to provide clarification on Article 117 following Madina MP’s attempted arrest.

According to Maame Ekua Addadzi-Koom, providing the needed clarification, especially when it comes to the timeline of the phrases “on his way to”, “attending to” or “returning from” in the Article, would leave no room for ambiguity.

Article 117, provides for immunity from service of process and arrest, and says “Civil or criminal process coming from any court or place out of Parliament shall not be served on, or executed in relation to, the Speaker or a member or the Clerk to Parliament while he is on his way to, attending or returning from, any proceedings of Parliament.”

Explaining her point on The Law on JoyNews on Sunday, Miss Addadzi-Koom said that “in Australia, for instance, if you arrest an MP five days on his way to parliament or five days on returning from parliament, which will be working days, you cannot arrest or serve any process on him. But, then we don’t have that in Ghana.”

She stated that in the Madina MP Francis Sosu’s case he informed the police he was on his way to Parliament but took a detour to the protest grounds hence he will head over to the House when he leaves the grounds.

Thus, having a clear definition of the time limit of the phases “on his way to, attending at or returning from” will clear up when the police or a security agency can arrest or serve notice of arrest to an MP, Miss Addadzi-Koom added.

She said that “this provision (Article) 117 is replicated in the Parliamentary Act of 1965 Act 300 Section 20. It repeats the same thing and adds certain things but it still doesn’t address, the time limit between ‘on his way to, attending at or returning from’.”

This comment comes after the police attempted to arrest Madina MP, Francis Sosu when he embarked on a protest with his constituents over bad roads on Monday, October 25.

The demonstration turned chaotic when protestors blocked a section of the road and set tyres ablaze.

The legislator argued that he had a parliamentary call to attend and could not be apprehended until the Speaker of Parliament is contacted.

Mr Sosu later filed a complaint of contempt of Parliament against the two police officers to the Speaker of Parliament.

He wants the Speaker to take action with respect to Article 117 of the 1992 Constitution and Order 28 of the Standing Orders of Parliament.

There have been opposing opinions on the meaning of Article 117 following the MP’s decision to file for contempt with Legal Expert, Ace Ankomah charging the Ghana Police Service to go to the Supreme Court to seek an interpretation of Articles 117 and 118 of the Constitution.

Meanwhile, Miss Addadzi-Koom believes that for the country to be rid of confusion and conflicting interpretation of what the law means there has to be an amendment of Article 117.

She stated that “I would prefer that Parliament sits down as the lawmakers and already having an act in existence, they can just amend the act and improve those details.”