Ashanti chiefs complain to Lands Ministry over mining in reserves 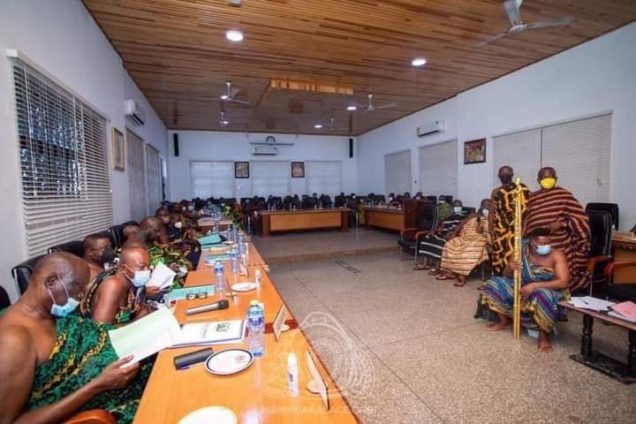 Some members of the Ashanti Regional House of Chiefs are worried over the flouting of the ban on gold prospecting and mining in forest reserves in the region.

According to the Chief of Manso, Nana Bi Kusi Appiah, miners continue to destroy the Apamprama and Oda Forest Reserves in the Manso enclave.

He said though the Lands and Forestry Commissions in the Bekwai area have been summoned by the traditional authority, their responses remain unsatisfactory.

The traditional leader observed that the country risks losing these reserves as miners and timber merchants continue to destroy the forests.

“The Oda and Apamprama Forest Reserves are now being mined for gold. No chief or the District Assembly is getting revenue from what is being done there. Aside the mining they are doing in there, others are harvesting the timber without the requisite licensing”, Nana Bi Kusi Appiah emphasized in a meeting between the Ashanti Regional House of Chiefs, chaired by the Asantehene, and the Ministry of Lands and Natural Resources.

According to the Minister of Lands and Natural Resources, Samuel Abu Jinapor, only three mining firms have the necessary documentation to mine in the forests.

There is already a ban on prospecting and mining in forest reserves.

Mr. Jinapor said he has no idea of the illegal activities in forest reserves.

“Any prospecting that goes for more than five years is mining. Let me tell you the laws made to protect the reserves. Me as a Minister, on the instructions of President Akufo-Addo, we have banned prospecting, recognizance and exploration in all forest reserves. So if anyone brings documentation for gold prospecting in your area, it is illegal,” he emphasised.

On the harvesting of timber in the reserves, the Minister said the depletion of the forest continues to be a worry.

He stated that the Ministry will take appropriate action on the harvesting of timber in reserves.

“Before anyone enters the forest for any activity, the Minister of Lands and Natural Resources grants the license and permit. But that is an exercise of discretionary power, the Minister is enjoined to exercise discretion. I have said it, and I am emphasizing it today, I can’t understand why a responsible Minister of Lands and Natural Resources will continue to grant license for the harvesting of wood species in forest reserves of the country,” he said.

The Minister continued, “From 1900 till date, eighty percent of our forest cover is gone. As a kid, I noticed forest canopies in Kumasi whenever I took a trip here”.

Meanwhile, the Asantehene is advocating compensation for communities that have forest reserves who are barred from entering the forests for their source of livelihood.