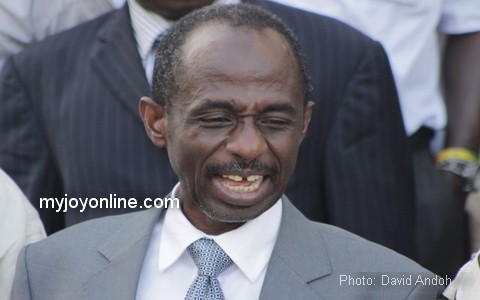 Mike Oquaye, Jr., is apt in describing the General-Secretary of the ruling National Democratic Congress (NDC), Mr. Johnson Asiedu-Nketia, as a confused man.

In the wake of Nana Akufo-Addo's declaration of his intention to take a third shot at the presidency, Mr. Asiedu-Nketia was widely reported to have made the following remark: "We know how to beat him [i.e. Nana Akufo-Addo]; we will sharpen our campaign skills and give him a third-time defeat" (See Akufo-Addo Will Taste Another Defeat In 2016 – Asiedu-Nketia).

Mike Oquaye, Jr., is apt in describing General Mosquito (as the NDC's chief scribe is popularly known) as a confused man, but for quite different reasons than yours truly (See Asiedu-Nketia Is Confused – Mike Oquaye, Jr.)

For the son of the recently retired well-respected statesman and former University of Ghana scholar and political scientist, General Mosquito has unwisely jumped the gun; for Nana Akufo-Addo has only declared his intention to gun up for the presidency for the third time, and has yet to be nominated by the country's main opposition party as such.

In other words, between now and the next New Patriotic Party's congressional confabulation a lot of things can change, thus making the party's Election 2016 presidential-nomination contest decidedly a tossup.

Significantly, though, Mr. Oquaye, Jr., is also quick to point out that contrary to what the NDC General-Secretary would have the Ghanaian electorate believe, come 2016 and 72-year-old Nana Akufo-Addo would still be tough, savvy and sprightly enough to weather the rigors of a hotly contested presidential electioneering campaign.

Equally importantly, the younger Mr. Oquaye firmly believes that Nana Akufo-Addo, if elected president, would be a far more creative, visionary and competent leader than President John Dramani Mahama, the man who has been widely described as a pathologically pathetic presidential stop-gap by many disappointed Ghanaians, irrespective of party and/or ideological persuasion.

For this writer, however, what makes Mr. Asiedu-Nketia an indisputably confused man is the fact that in the wake of then-Transitional President Mahama's declaration as winner of Election 2012 by Dr. Kwadwo Afari-Gyan, the Electoral Commissioner, Mr. Asiedu-Nketia stormed several radio stations and contritely blamed Mr. Mahama's victory on the abject lack of viglance on the part of the top leadership of the New Patriotic Party. And to be certain, the latter public confession would prominently figure in the unnecessarily prolonged judicial tussle between Messrs. Mahama and Akufo-Addo.

It is also significant to recall the fact that most of the jurists who sat on the Atuguba-presided Supreme Court panel, that adjudicated this veritable constitutional impasse, were of the view that while, indeed, Mr. Mahama had garnered more ballot counts than Nana Akufo-Addo, nonetheless, the declared winner had not crossed the 50-percentile threshold constitutionally required to secure the mandate of the people.