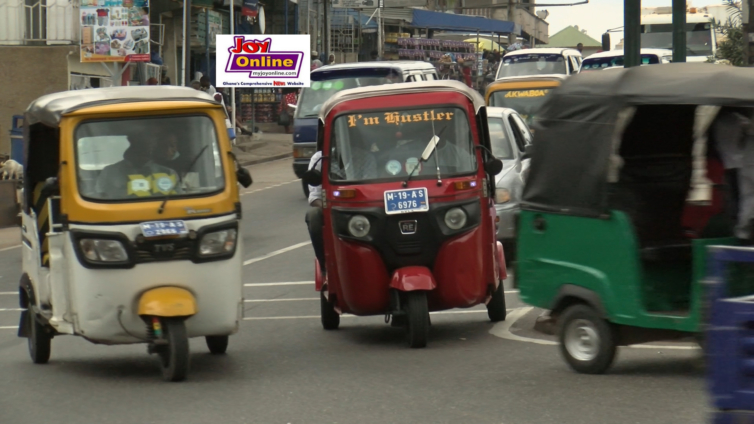 Persons below 18 years will no longer be allowed to ride tricycles in the Asokore Mampong Municipality of Ashanti Region.

The measure is part of a new by-law by the local assembly to regulate operations of the passenger rickshaws, known locally as ‘Pragya’.

“If you are not up to 18-years of age, you cannot ride. You should not take more than two people [passengers].

“You will lose the privilege of riding ‘Pragya’ if you take someone on the shoulder of the rider. You should follow traffic protocols,” Alhaji Alidu said.

Asokore Mampong Municipal accounts for about 90 per cent of commercial  tricycles in Greater Kumasi.

Though statistics are not readily available, authorities say they are alarmed by increasing rate of road crashes involving ‘Pragya’.

Alhaji Seidu told JoyNews the new by-laws also limits the number of passengers to two, instead of the three as pertains presently.

He revealed police and a team of volunteers have been tasked to enforce the by-laws.

The Road Traffic Act prohibits commercialisation of motor and tricycles.

“We are not legalising illegality. It has come to stay. Look at the numbers. If we have about 10,000 ‘Pragya’ in Ashanti region and for that matter in Kumasi and you can get 9,000 of it within Asokore Mampong, whether we like it or not, they are on the streets,” he defended.

According to Alhaji Seidu, banning commercial tricycles from operating in the area would be too  expensive a decision for the local assembly.

“The assembly and for that matter, Asokore Mampong cannot issue a word that we are banning you[‘Pragya]. It will come with a consequence.

But when the Transport Ministry comes up with something like that we can’t wait, then we will also do that within our context.