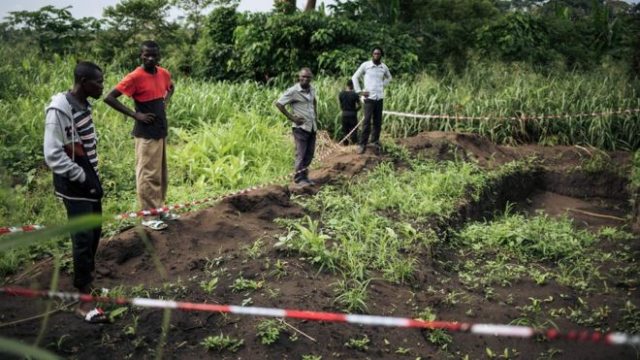 A UN investigation says violence in the Democratic Republic of Congo last year may amount to crimes against humanity.

It says at least 500 people were killed, including families burnt alive in their homes and a two-year-old who was thrown into a septic tank.

Ethnic violence broke out when one community wanted to bury one of their traditional chiefs on another community's land.

The investigation adds that violence could flare up again at any time.

Investigators say the violence between 16 and 18 December was "planned and executed with the support of customary chiefs".

It adds that the provincial authorities in Yumbi, in Mai-Ndombe Province, in the west of the country, "appear to have failed in their responsibility to protect the population".

The casualty numbers are probably a lot higher than the 535 in the report.

In January the UN said they suspected at least 890 people had died.

They sent out an investigation team who only managed to reach three out of the four villages at the heart of the attack.

Bodies are also believed to have been thrown into the Congo River.

People sought refuge by crossing the Congo river into neighbouring Congo-Brazzaville. Some 16,000 residents have been displaced, the investigation said.

Voting in the 30 December presidential election was postponed until 31 March in Yumbi because of the violence. However, opposition candidate Felix Tshisekedi has already been declared the winner.