Two of Australia’s bush fires are likely to merge into a so-called “mega blaze” on Friday evening, authorities have warned.

The merger is expected at the border of New South Wales and Victoria and has been feared for days.

Prime Minister Scott Morrison warned Friday would be “a difficult day in the eastern states” amid forecasts of heat, strong winds and dry lightning.

A spokesman for the New South Wales (NSW) Rural Fire Service told the BBC the merger of two fires – both of which are out of control – was “imminent” and expected at about 8pm (09:00 GMT).

The two fires at Dunns Road and East Ournie Creek has firefighters bracing for a difficult night – and aircraft won’t be able to operate after dark.

More than 100 bushfires are burning in worst-hit NSW alone, but the danger is equally great in Victoria. 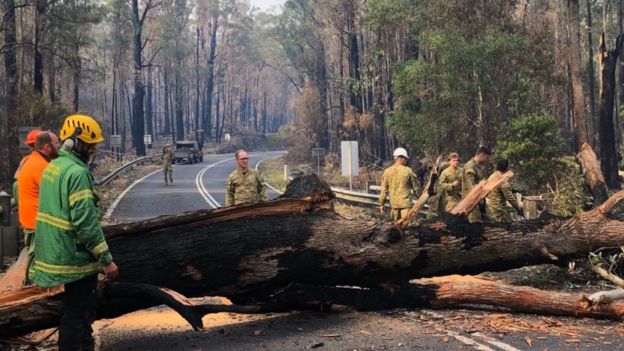 Firefighters clearing a road in Victoria

In parts of both Victoria and NSW, authorities urged people to leave their homes “to avoid tragedy”.

Fires in NSW have destroyed about 1,000 homes since the New Year.

Mr Morrison said that two ships remained off the coast of NSW ready to evacuate towns if needed.

What happened on Kangaroo Island?

A town on the island in South Australia spent the night cut off by bushfires as the weather whipped up the most significant threat for almost a week.

Erratic winds on Thursday had amplified a blaze which isolated the island’s biggest town, Kingscote, from roads.

Since September, at least 27 people have died in Australia’s bushfires, which have destroyed more than 10.3 million hectares nationally.

“We are a long way from the end of this crisis and this disaster,” Mr Morrison said.

Firefighters from the US, Canada and New Zealand are among those who have flown in to assist fatigued crews.

US fire fighters arrived at Sydney Int Airport this week, on their way to assist with fire fighting in Victoria.
Coming through, all gathered gave a spontaneous & lengthy round of applause, reflecting the gratitude & admiration we all have for their generosity. #NSWRFS @NSWRFS pic.twitter.com/5epg5y4qxX

On Thursday, a waterbombing helicopter crashed into a reservoir in the Bega Valley Shire region as it was refilling there. The pilot, contracted by the Rural Fire Service, survived.

The crisis has also taken a vast toll on wildlife. An estimated 25,000 koalas were killed when flames devastated Kangaroo Island last week.

Australia saw its hottest and driest year on record in 2019 due to two specific weather phenomena and climate change, the Bureau of Meteorology said on Thursday.

Authorities have warned that the huge fires, spurred by high temperatures, wind, and a three-year-drought, will persist until there is substantial rainfall.