Australia bushfires: PM Morrison apologises for US holiday amid crisis

Australian Prime Minister Scott Morrison has apologised for going on holiday in Hawaii this week while the nation’s bushfire crisis worsened.

Crews are battling over 100 fires amid a heatwave which has produced the nation’s two hottest days on record.

Two volunteer firefighters died in a road accident on Thursday while deployed to a huge blaze near Sydney.

Mr Morrison said he would end his leave early. His absence this week has drawn condemnation and protests.

“I deeply regret any offence caused to any of the many Australians affected by the terrible bushfires by my taking leave with family at this time,” he said on Friday.

Why were people angry with the PM?

Mr Morrison was widely criticised after reports emerged that he was away on unannounced leave and rumoured to be in Hawaii.

Phrases such as #WhereisScoMo, #WhereTheBloodyHellAreYou – a reference to a famous tourism campaign he once oversaw – and #FireMorrison quickly trended online. 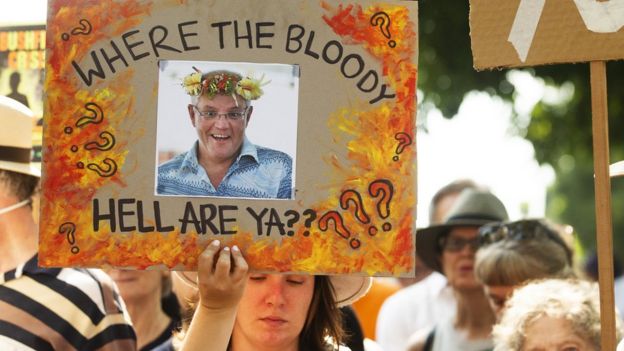 Protesters in Sydney on Thursday called for Mr Morrison to resign

Criticism grew as a heatwave broke records across the country and exacerbated mammoth blazes, making the task even harder for exhausted firefighters – many of them volunteers.

Government ministers defended Mr Morrison’s break as “appropriate”, but refused to confirm his whereabouts. His office told the BBC and others that reports he was in Hawaii were “incorrect”.

n Friday, he confirmed to radio station 2GB that he was in Hawaii with his family. He added he had been receiving regular updates on the fires and last week’s New Zealand volcano disaster, which killed at least 11 Australians.

“Given the most recent tragic events, I will be returning to Sydney as soon as can be arranged,” he said in a statement.

It came after the NSW Rural Fire Service said it was mourning the deaths of firefighters Geoffrey Keaton, 32, and Andrew O’Dwyer, 36. 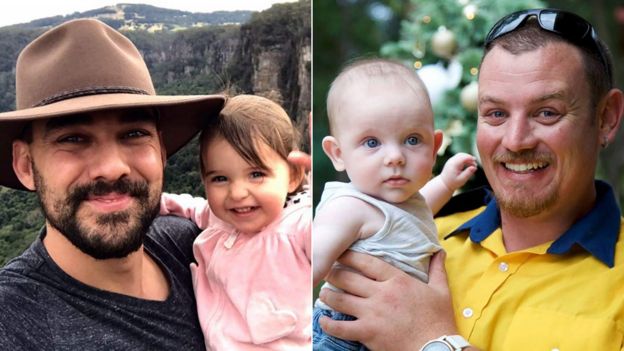 The men were killed on Thursday night when their firefighting vehicle was hit by a falling tree near a fire front, causing it to roll off the road.

Why is Morrison facing pressure on climate change?

Many Australians have accused Mr Morrison and his government of inaction on climate change.

or much of the fire crisis, the government has been reluctant to talk about the role of climate change in exacerbating blazes. This has sparked other protests.

Australia has been criticised internationally for its climate record, with the UN identifying it as among a minority of G20 nations falling short of its emissions promises.

Mr Morrison has said the nation only accounts for 1.3% of global emissions. However, Australia is one of the highest emitters of carbon pollution per capita, largely because it is still heavily reliant on coal-fired power.

The Labor opposition has also drawn criticism for policies which support coal mining.

What is happening with the fires?

Temperatures have exceeded 45C in several states this week, fanning bushfires in South Australia and NSW.

On Thursday, NSW Premier Gladys Berejiklian announced a seven-day state of emergency due to forecasts of worsening conditions. The intense heat is expected to persist into Saturday, forecasters warn.

The nation may have its all-time temperature record broken again after it was smashed twice this week. It hit a high of 41.9C (107.4F) on Wednesday.

Of the firefighters’ deaths, the NSW Rural Fire Service said: “This is an absolutely devastating event in what has already been an incredibly difficult day and fire season.”