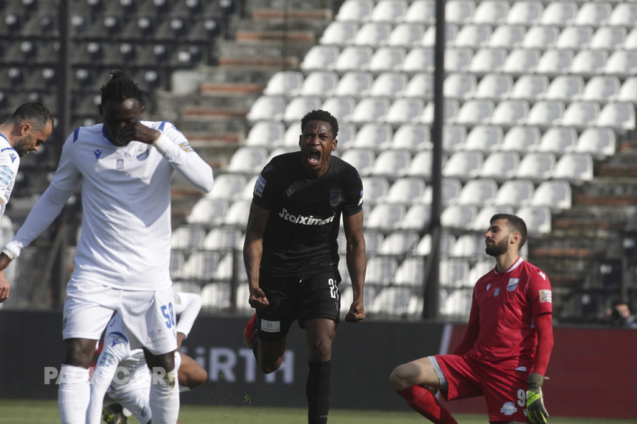 On-loan Chelsea defender Abdul Rahman Baba was on target in his first game for Greek side PAOK as they handed Lamia a 4-0 thrashing in league action on Sunday.

On his debut, the left-back made the most of his 90 minutes on the pitch, scoring the opener to ensure three points for his side in the matchday 23 fixture at Toumba Stadium.

The result leaves PAOK joint-top of the league standings with Olympiacos while Lamia sit three places from the bottom.

Baba opened the scoring on the day in the 18th minute, receiving a pass inside the box, outwitting three men and slotting a shot past goalkeeper Panagiotis Katsikas.

Three minutes after the break, Christos Tzolis doubled PAOK’s lead with a low shot from the edge of the box after being put through on goal by Andrija Zivkovic.

Egypt attacker Amr Warda made it 3-0 in the 52nd minute with a first-time shot from close range before Zivkovic turned finisher with a powerful shot from just inside the box in the 66th minute.

Last month, Baba joined PAOK in a loan deal which runs until the end of the season.

The move is another attempt to revive his career which has been heavily plagued by injuries in recent times.

“I’m feeling great and happy to be here. To come here was an easy decision for me. First impression has been very good. It has been very welcoming here: the people, the fans. I have received so many social media messages. I am very happy,” Baba said on his move to PAOK.

“I already know a little bit about the club from watching football and I know about how passionate the fans are, so I know a little bit about the club before making this choice. I’m ready. I’m feeling good physically and mentally. I’ve been training and playing games, so for me, physically and mentally I’m ready and I can’t wait to get it started.

“This is a good chapter for me and I know PAOK in the past years have always been fighting for the title. This is the main or one of the main reasons why I chose PAOK. I can’t wait to achieve the club’s goals.”

The 26-year-old was snapped up by Chelsea from German side Augsburg in a five-year deal in 2015.

Owing to limited opportunities at Stamford Bridge, however, he has been forced to spend every season since the 2015-16 term out on loan, playing for Schalke 04 in Germany, Stade Reims in France and most recently Spanish fold Real Mallorca. His time with Schalke and Mallorca were heavily marred by injuries.

His return to action will be good news for Ghana ahead of the resumption of the 2021 Africa Cup of Nations qualifiers next month.