Barca's Aleix Vidal out for 5 months after dislocating ankle - MyJoyOnline.com

Barca’s Aleix Vidal out for 5 months after dislocating ankle 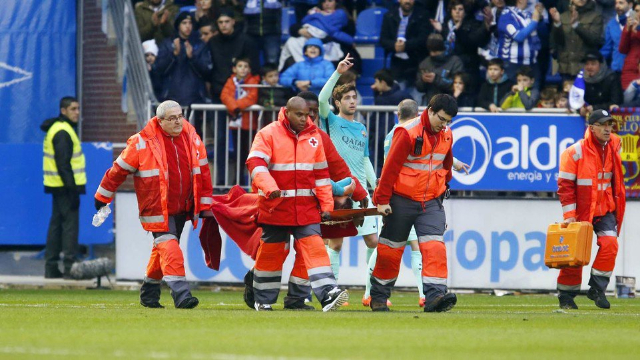 Barcelona right back Aleix Vidal will miss the remainder of the season after suffering a dislocated ankle during his side's 6-0 win at Alaves, the La Liga champions said on Saturday.

Vidal was seen writhing in pain following a challenge from Alaves defender Theo Hernandez in the 85th minute and left the pitch in tears on a stretcher.

A medical report from Barca said he underwent surgery on Saturday night in a hospital in Vitoria and will be out of action for five months.

"I was right by his side when it happened and it seemed very ugly to me, it was shocking," said Barca midfielder Ivan Rakitic.

The season-ending injury comes at the cruelest of times for Vidal, who had fought his way back into the Barca side at the turn of the year having been overlooked by coach Luis Enrique for over three months.

Vidal had laid on the pass for Luis Suarez's opening goal against Alaves and last week scored with a brilliant individual strike in a 3-0 win over Athletic Bilbao.