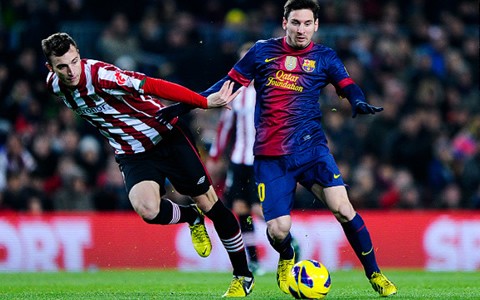 A Lionel Messi brace helped Barcelona to a 5-1 win over Athletic Bilbao and a new La Liga record on Saturday.

With 13 wins and one draw so far, Tito Vilanova’s side surpass the previous record for the best start to a season set by Real Madrid back in 1991-92.

Gerard Pique put the home side ahead in the 22nd minute with Messi doubling the lead three minutes later.

Adriano all but sealed the points with a goal at the end of the first half and Cesc Fabregas made doubly sure 12 minutes after the restart.

Ibai Gomez goal in the 66th minute ensured Bilbao’s trip wasn’t completely wasted but it was Messi who once again had the final say putting away his second of the match moments later.

The Argentine is now one goal away from equaling German Gerd Muller’s record of 85 goals in a calendar year set in 1972.

Barcelona’s nearest rivals in the title chase squared up to each other in the Madrid derby with Real overcoming Atletico 2-0 at the Bernabeu.

A stunning 30-yard free kick from Cristiano Ronaldo in the 15th minute put Jose Mourinho’s men ahead before Mesut Ozil securing all three points with a strike in the 65th minute.

The result sees Real reduce their arrears with Atletico to five points with Barca still 11 points ahead.

Earlier on Saturday, Mauricio Pellegrino was sacked as manager of Valencia following a 5-2 defeat at the hands of Real Sociedad.

The result sees Philippe Montanier’s side move up to seventh, one place behind Getafe who beat fourth-placed Malaga 1-0.

Meanwhile in Serie A, Juventus extended their lead over Napoli — who play Pescara on Sunday — to five points with a 3-0 home win over Torino.

The visitors were reduced to 10 men in the 40th minute when Polish defender Kamil Glik was shown a red card.

Juventus took full toll of the numerical advantage in the second half with two goals from Claudio Marchisio and one from Sebastian Giovinco.