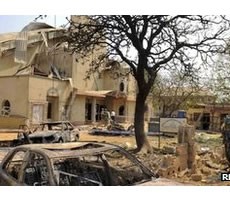 A key suspect in the Christmas Day bombing which killed at least 38 people in Nigeria has escaped from custody, police have admitted.

Kabiru Sokoto – believed to be a member of the Islamist sect Boko Haram – was arrested on Saturday in the capital Abuja after police trailed him.

But the very next day he escaped as police attempted to search his house outside the capital.

A police commissioner has been arrested, police said in a statement.

It is a huge embarrassment for a nation struggling to contain an increasingly bloody campaign of violence blamed on Boko Haram, observers say.

He was arrested on Saturday in Abuja at a lodge owned by a state governor, says the BBC’s Mark Lobel in Nigeria – adding that it appears the state governor was not aware of his presence.

The next day, the suspect was taken to his home just outside the capital, which police intended to search.

But youths surrounded the police cars and pandemonium broke out, our correspondent says – during which the suspect managed to escape.

“The police view this development as a serious negligence on the part of the commissioner of police and have since queried and suspended him from duty,” it added.

The commissioner was not identified.

This is either huge incompetence or worse on the part of the police, our correspondent says.

Mr Sokoto was the only major suspect to be arrested of late for involvement in the bloody attacks blamed on Boko Haram which have terrorised Nigeria.

Suspicion is now hovering over the police that there may have been some kind of collusion with Boko Haram, our correspondent says.

Last year, Boko Haram carried out suicide bombings on high-profile targets such as the headquarters of the UN and the police in Abuja.

Reports suggest it has been blamed for at least 74 killings this year alone.