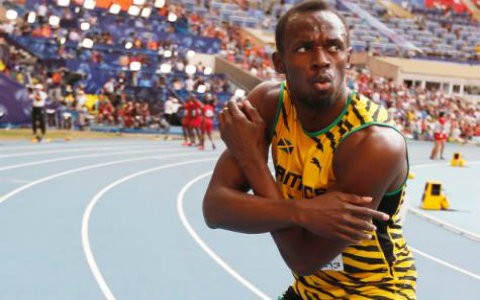 Scientists may have found the secret of Usain Bolt’s success – his perfect knees.

A study of Jamaican youngsters found those whose legs, and particularly knees, match in size grow up to be the keenest and best sprinters.

The finding could help explain why athletes from the small Caribbean island dominate 100m and 200m races around the world.

Although the theory may seem bizarre, many scientists believe perfectly paired body parts to be a sign of good genes and good health.

The 14-year study involved almost 300 Jamaican schoolchildren who underwent a battery of body measurements from the age of eight.

When they reached 22, they were asked to take part in more tests, including two sprint races.  Just over half took part.

Analysis of the results showed that those with the most symmetrical legs – and in particular knees – as children were more likely to agree to race.

They also clocked up faster times than the other young men and women.

Research also suggests that Jamaican children’s legs tend to be more symmetrical than those of their English counterparts.

Northumbria University researcher John Manning said his results could help explain the success of six-time Olympic gold medallist Usain Bolt and his teammates on the track.

Professor Manning said:  ‘We found that participants with symmetric legs in 1996, particularly knees, tended to volunteer for the sprints and they tended to run the fastest when tested in 2010.

‘There was some evidence that these Jamaican children had substantially more symmetry in their legs than UK children.

‘So we think our results inform the debate as to why Jamaicans tend to win gold medals in sprinting.’

Other theories behind Jamaicans’ sprinting success include higher numbers of ‘speed genes’ and fast-twitch muscle fibres the provide the explosive power needed for sprinting.

Professor Manning said that more research is needed to back up his symmetry theory.
He told the Independent: ‘We need to…look at international level sprinters and add some genetic tests.

‘Also more data on Caucasians will help to further clarify the issue.’

Writing in the journal PLoS ONE, he added that symmetrical knees and legs may not only be conductive to speed.  They may also be a sign of general healthy development of the body.
Professor Manning said: ‘It may be the simple explanation is that symmetric knees are more efficient during sprinting.

‘However, for me, the most likely explanation concerns the nature of developmental stability.
‘People have a genetic instruction to develop symmetrically across most of the body. However, it is very difficult to maintain symmetry in, for example limbs, particularly if one is a rapidly growing child.

‘We initially measured these children when they were about 8 years old, and their knee symmetry at 8 years predicted their sprinting speed years.