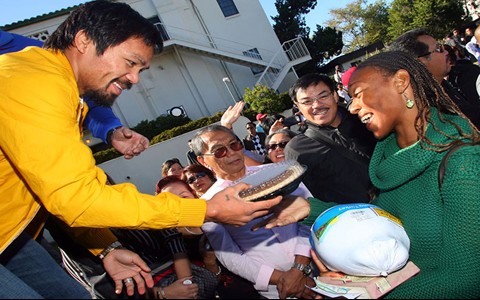 Fighter of the Decade and self-proclaimed “Pinoy Pilgrim” Manny Pacquiao gives away Thanksgiving turkeys and pies in appreciation to his fans at the Westside Shepherd of the Hills Church in Los Angeles on Sunday.

Pacquiao is in deep preparation for the upcoming fourth fight of his historic rivalry against three-division world champion Juan Manuel Marquez.

Promoted by Top Rank, in association with MP Promotions, Zanfer Promotions, Marquez Boxing, Tecate and MGM Grand, Pacquiao vs Marquez 4 will be produced and distributed live by HBO Pay Per View from the MGM Grand in Las Vegas on Saturday, Dec. 8.