CAFCC: Aduana poised for maiden win against AS Vita Club 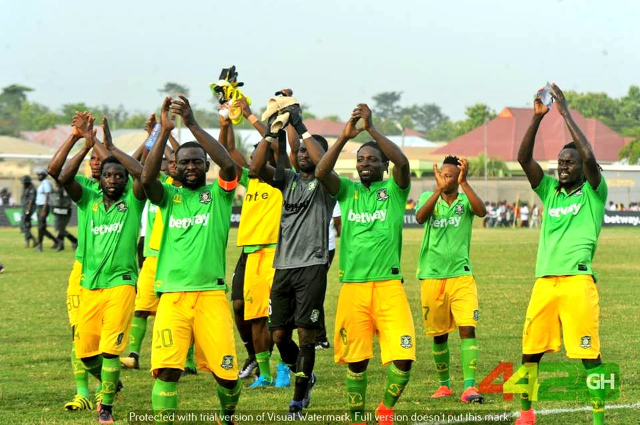 It will be top and bottom of the table clash on Wednesday when Ghana's Aduana Stars host AS Vita of DR Congo in a Day Three clash at the Nana Agyemang Badu Park inside Dormaa on Wednesday.

The Ghanaians are without a win at the group stage, losing to ASEC Mimosas (Cote d’Ivoire) and drawing at home to Raja Club Athletic (Morocco) in the previous two games.

With no football activity in Ghana for the past month, the 'Ogya Boys' will have to play above themselves if they are to reach their immediate goal of their first win at the expense of AS Vita, crowned DR Congo champions last week. The Kinshasa-based wrapped up the title last Thursday with a 1-0 victory over AS Dragons Bilima, finishing three points clear above rivals TP Mazembe.

However, the biggest challenge of Aduana will come from within as new head coach Kenichi Yatsuhashi will have to hit the ground running to win the love of the fans following his appointment last week.

Yatsuhashi, who cut his teeth in Ghana football during his spell with Heart of Oak two years ago and lately Inter Allies, admits that his first task is to create a winsome team within this short time to face AS Vita, an action he stressed will be tough but doable.

“I just stepped in as head coach and we have less time, just one week for the game against AS Vita. But the good thing is that I know this Aduana team well, I have played against them twice previously so I have a fair idea. I can build on it before we face AS Vita,” Kenichi who replaced former Yussif Abubakar stated.

“We have to intensify our training sessions, and work extra hard and hopefully we can get a good result and carry on from there. It’s not impossible and I believe that with the right attitude both at training and during the game, we can bring the club back in contention for qualification to the quarterfinals of the competition.”

Captain Emmanuel Akuoko on his part has called for more support from the fans despite the difficult times they find themselves in.

"It’s not easy for us because there is no football activity and nothing is going on for us. We lost our coach last week and we have a new one ahead of our match against AS Vita. We are confident as a playing body that we will scale all these hurdles and dish out a good game to our fans on Wednesday. All we need from them at this point is their support,” Akuoko said.

This is the first-ever meeting between both teams at any level. Aduana are rooted at the bottom of Group A with just a point after two games. AS Vita sits atop on four points, ASEC Mimosas with three points and Raja Club Athletic in that order with two points.