Pell was granted leave to appeal the verdict in the High Court of Australia.

The ex-Vatican treasurer, 78, is currently serving a six-year jail term for abusing two boys in a Melbourne cathedral in the 1990s.

He lost his first challenge against his convictions in August and has consistently maintained his innocence.

Pell is the most high-ranking Catholic official in the world to be convicted of child sexual abuse.

Last December, a jury unanimously found him guilty of sexually abusing two 13-year-old boys in St Patrick’s Cathedral, when he was the city’s archbishop.

The convictions include one count of sexual penetration and four counts of committing indecent acts.

Pell unsuccessfully challenged the verdict in Victoria’s Court of Appeal in August, when a panel of three judges ruled against him 2-1.

They rejected the cleric’s argument that the jury’s verdict had been unfair and had relied unreasonably on the testimony of one victim. 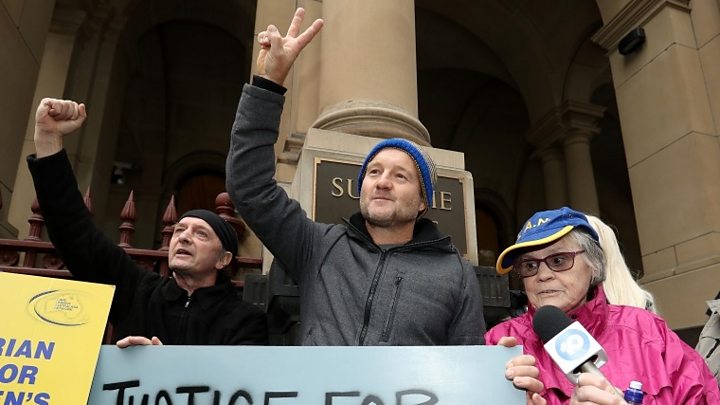 ‘The little people have won’: Activists react to Cardinal Pell losing his first appeal in August

Pell will now argue the judges erred in their decision on those grounds.

His appeal will be heard next year in the High Court of Australia, where a ruling will be made by a majority of seven judges.

This will be the final ruling on the case and it cannot be further challenged.

Pell’s case has rocked the Catholic Church and he was demoted from the Pope’s inner circle last year.

The Vatican has faced calls for Pell to be defrocked, but it has said the cleric has the right to pursue all legal appeals.