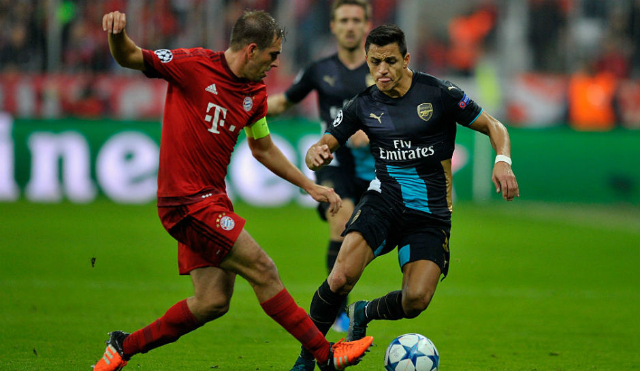 Bayern intend to make home advantage tell against an Arsenal team who, having bowed out in the round of 16 for six seasons running, now need to break with recent history in order to survive.

Arsenal have not been past the round of 16 since 2009/10; to end that run they must overcome familiar opponents FC Bayern München, who have beaten the Gunners at this stage twice in recent years, in 2013 and 2014.

In last term's group stage, Arsenal overcome Bayern 2-0 in north London thanks to goals from Olivier Giroud and Mesut Özil.

However, the German team triumphed 5-1 back in Munich with Thomas Müller (2), David Alaba and Arjen Robben on the scoresheet. Giroud again scored for Arsenal.

Arsenal drew 1-1 at the Fußball Arena München in the 2013/14 round of 16 second leg when Lukas Podolski, returning to his former club, equalised within two minutes of Bastian Schweinsteiger putting the hosts ahead. Arsenal went out of the competition having lost 2-0 at home, with Müller once more on target.

At the same stage of the previous season the Gunners won 2-0 in Germany, Giroud and Laurent Koscielny finding the net. They exited on away goals having lost 3-1 at home where Müller again scored. This is Bayern's 17th encounter with English opponents in the last five seasons. They have won the last three such home games but previously had not prevailed in four in Bavaria, including the 2012 final defeat on penalties by Chelsea FC.

Under Josep Guardiola, Bayern were losing Uefa Champions League semifinalists in each of the last three campaigns, beaten on away goals by Club Atlético de Madrid last term.

Bayern have posted 15 straight home wins in the Uefa Champions League – a competition best – including three this season.

The Gunners finished top of Group A, two points ahead of Paris Saint-Germain, staying unbeaten away from home (W2 D1). They also avoided defeat at home and the last time they won their group unbeaten (2005/06), they went on to reach the final.

Arsenal have lost three of their last seven European away matches; before that they had met defeat only twice in 11 games on the road.

In Germany they have lost two matches and drawn one on their last three visits; in the five before that they won three and drew two.

Mesut Özil has scored four goals in his 15 appearances against Bayern.

Granit Xhaka was part of the Basel squad that lost 7-0 at Bayern in the 2011/12 last 16 second leg, Robben netting twice.

In the first leg of the 2012/13 semifinal, Lewandowski scored all four against Özil's Real Madrid in a 4-1 Borussia Dortmund win.

Müller got three goals and Robben two against Alexis Sánchez's Barcelona in a 7-0 aggregate win (4-0 h, 3-0 a) in the 2012/13 Uefa Champions League semifinals.

Müller registered in Germany's 2-1 win in a Paris friendly on 6 February 2013 against a France team containing Franck Ribéry, Koscielny and Giroud. Philipp Lahm and Özil played for the visitors.

Giroud scored in France's 2-1 friendly victory in Bremen on 29 February 2012 against a Germany side featuring Boateng, Özil, Müller and Manuel Neuer. Ribéry also played for the visitors.

Sánchez was on target in Chile's 2-0 win over Costa's Brazil in a Fifa World Cup qualifier on 8 October 2015. Lahm and Boateng are a booking away from a ban.

Bayern are 11 games unbeaten, winning 10 of them, since the 3-2 loss to FC Rostov on matchday five.

Ancelotti's men will host FC Schalke 04 in the German Cup quarterfinals on 1 March.

Lahm announced on 7 February that he will retire at the end of the season, despite his contract running until summer 2018.

Ribéry (out since 31 January, hamstring) has missed Bayern's last two games. Boateng has not played since undergoing pectoral muscle surgery on 20 December.

Lewandowski, named Poland's footballer of the year for the sixth consecutive season on 4 February, has scored 30 goals in 33 outings for club and country this term. Arsenal have won eight of their 13 games since matchday six, losing four of them.

Making his first start since 8 May 2016 after knee surgery, Danny Welbeck scored twice in a 5-0 FA Cup fourth round victory at Southampton FC on 28 January.

Theo Walcott registered a hat-trick, his fifth for the Gunners, against Southampton.

Arsenal will play fifth-tier Sutton United FC in the FA Cup fifth round on 20 February.

Aaron Ramsey was ruled out for three weeks after suffering a calf strain in the 2-1 home loss to Watford FC on 31 January.

Héctor Bellerín was substituted with a head injury sustained while trying to prevent Chelsea FC's first goal in the Gunners' 3-1 loss at Stamford Bridge on 4 February. However, he played all of Saturday's 2-0 defeat of Hull City AFC. "You need character and luck to win the Uefa Champions League, but above all courage. We won't focus on avoiding conceding, but we want to control possession as Arsenal have quick players and can counter well.

"Arsène Wenger is experienced, has a strong identity and his team play with great style. I have a lot of respect for him. We need to make things uncomfortable for them on the pitch." "We need to forget the past meetings with Bayern and focus on now. We have experience of playing them every year, and they always have the same goal of winning the competition. We are capable, we have home advantage in the second leg, but that means nothing if we don't play well tomorrow.

"I expect Bayern will try and dominate, as usual. They will play with a lot of possession, with a lot of speed in attack. We need a big performance against them. Ospina will play in goal: the quality of his performances in the group stage is why we are here today."