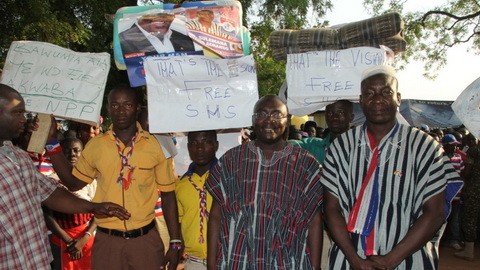 Children in Bole in the Bole-Bamboi constituency of the Northern Region on Saturday came out in their numbers to clearly demonstrate their desire for free secondary education as they joined hundreds of adults to welcome NPP Vice-Presidential candidate, Dr. Mahamudu Bawumia who was in the town as part of his tour of the constituency.

Taking part in an hour long procession from the outskirts of Bole to the Bolewura’s palace and finally to the grounds of a mini-rally addressed by Dr. Bawumia, the children run along the convoy of the NPP running mate amidst chants of “Free Education, Free Education”.

The children of Bole were not the only ones demonstrating their desire for free SHS; many youth of the town also used the opportunity of the visit of the NPP Vice-Presidential candidate to show their support for the NPP’s pledge to make education free from kindergarten to the secondary level as they dressed themselves fully in school uniforms while carrying mattresses and boxes to signal the fact that they are fully ready to enrol into the various second cycle institutions as soon as money is removed as a barrier to education.

Speaking at the mini-rally organized to climax the visit of the NPP Running Mate, Dr. Bawumia stated that he was a proud beneficiary of free and quality education as was enjoyed by Northerners and said that it was for this reason that he was fully committed to the making education free up to the secondary level as it was not only workable but necessary for the future of the nation.

“It should not be surprising that the NDC is going round saying that free secondary education is not possible. That is the same way they behaved when the NPP promised to introduce a National Health Insurance Scheme, they went to the extent of even walking out of parliament. But not only did the NPP introduce the NHIS, we also introduced various other social interventions like the capitation grant, school feeding programme, metro mass transit, livelihood empowerment against poverty (leap), free maternal care etc. that was even when we were a HIPC economy. So that is the character of the NDC, left to them, everything is impossible. But I stand here to tell you that free SHS would become a reality effective 2013 if you give us the mandate. I am a proud beneficiary of free education and that is why I am resolved to aid Nana Akufo-Addo to make free quality secondary education a reality once you give us the mandate”, he said.