Comedians rally around Chris Rock, express concern about violence towards comics: ‘Now we all have to worry’ 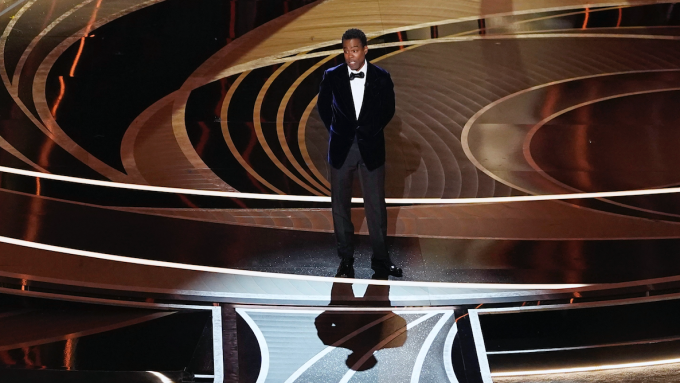 Hamill’s tweet drew the distinction between speech and action that many have continued to drive home as the comedy community (mostly) rallies around Rock.

Howard Stern said on his SiriusXM show this morning, “You don’t hit people over speech, certainly not at the Academy Awards, and Will Smith’s got to contain himself.”

Jim Carrey agreed, telling Gayle King on CBS Mornings Tuesday, “If you want to yell from the audience and show disapproval or say something on Twitter [that’s ok]. You do not have the right to walk up on stage and smack somebody in the face ‘cuz they said words.”

Most comedians’ reactions to the slap that stunned the Oscars — when Will Smith bounded on stage and struck Rock over a joke about Smith’s wife Jada Pinkett Smith, seem mostly to come down decidedly for, as one comedian puts it, Team Rock. (Smith has since apologized to Rock.)

Kathy Griffin was among the first to speak out strongly, expressing a concern that many comedians echoed.

“Let me tell you something,” Griffin tweeted, “it’s a very bad practice to walk up on stage and physically assault a Comedian. Now we all have to worry about who wants to be the next Will Smith in comedy clubs and theaters.”

Comedian Hal Sparks also expressed concern that Smith’s action might have “green lit a lot of violence” toward comedians.

“Somebody in #willsmith’s circle needs to tell him that there is no way what he did tonight won’t result in a comedian somewhere getting beat up or killed. He green lit a lot of violence.”

Patton Oswalt said he was “very nervous for my shows at the @TheIrvineImprov tomorrow and Tuesday. Anyone have a catcher’s mask I can borrow?”

Judd Apatow may have had the strongest reaction. The Emmy-winner tweeted about Smith last night, “He could have killed him. That’s pure out of control rage and violence…He lost his mind.”

That tweet and others from Apatow were later deleted. The comedian took a more measured tack on an episode of SiriusXM’s the Dean Obeidallah Show set to air tonight.

“Well, you’re somebody that people emulate, so it’s dangerous. You can’t have the Sidney Poitiers of the world behave that way,” he said on the show.

“And so, hopefully whatever that was, and maybe we don’t even know all the levels of it, or the backstory of it. And hopefully everybody figures something out and hopefully it becomes a teachable moment where Will Smith can speak to people in an honest way about why that was not the way to go.”

Apatow, echoing the concerns of other comedians, also said he hoped “we will hear a very clear expression of why that was a terrible, embarrassing, and dangerous mistake” from Smith. “I’m hopeful that will happen. I’d be very surprised if it didn’t because, basically, if that becomes the way it is, then you know, what’ll happen to Ricky Gervais on the next Golden Globes?”

Rosie O’Donnell called the incident “so upsetting – on every level – bravo to Chris Rock – for not eviscerating will smith [sic.] – which he could do any day of the week – he walked away – bravo from a sad display of toxic masculinity from a narcissistic madman.”

Four-time Oscars host Whoopi Goldberg also praised Rock for his restraint saying on The View today, “I do think it’s wonderful that Chris did not take it to that other place that he could have done.”

“I think it was a lot of stuff probably built up,” she said, with a nod toward the jokes that Will and Jada Pinkett Smith have endured over the years, including some from Rock himself when he hosted the Oscars.

“I think he [Smith] overreacted…I think he had one of those moments where it was like G.D. it, just stop. I get it, not everybody acts the way we would like them to act under pressure. And he snapped.”

The comedian said she didn’t think the King Richard star would lose his just-received Best Actor Oscar over it.

“We’re not going to take that Oscar from him,” Goldberg said. “There will be consequences I’m sure, but I don’t think that’s what they’re going to do, particularly because Chris said ‘Listen, I’m not pressing any charges.’ “

Comedian Tiffany Haddish, however, called Smith’s leap onto the stage “the most beautiful thing I’ve ever seen.”

At the Governors Ball following the ceremony, Haddish told People, “As a woman, who has been unprotected, for someone to say, ‘Keep my wife’s name out your mouth, leave my wife alone,’ that’s what your husband is supposed to do, right? Protect you.

“And that meant the world to me. And maybe the world might not like how it went down, but for me, it was the most beautiful thing I’ve ever seen because it made me believe that there are still men out there that love and care about their women, their wives.”

DISCLAIMER: The Views, Comments, Opinions, Contributions and Statements made by Readers and Contributors on this platform do not necessarily represent the views or policy of Multimedia Group Limited.
Tags:
Chris Rock
Comedians in America
Comics
Oscars 2022
Will Smith