Congratulations on your sterling 2021 WASSCE performance - GES to candidates - MyJoyOnline.com

Congratulations on your sterling 2021 WASSCE performance – GES to candidates 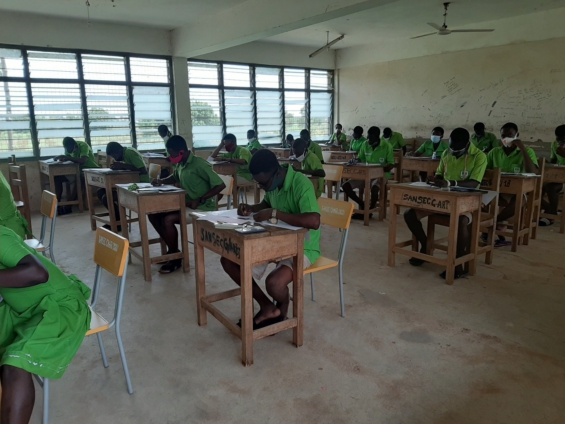 According to the Service, provisional results released by the West African Examination Council (WAEC) on Wednesday indicate that this year’s performance was “impressive.”

In a press statement, Head of Public Relations, Cassandra Twum Ampofo, revealed that “initial analysis of the results show that more than 50% of candidates obtained A1-C6 in all core subjects, Maths, Science, English and Social studies.”

“Management of GES congratulates the 2021 WASSCE candidates for the sterling performance,” the statement added.

Also, the Service used the opportunity to appreciate Heads of schools, teaching and non-teaching staff “for the very good work done” before and during the exams.

About 965 schools participated in this year’s examination.

Meanwhile, the West African Examination Council has revealed that 54.08 per cent of the candidates excelled in English Language as compared to 57.34 per cent who passed in 2020

According to the Council’s Head of Public Affairs, Agnes Teye-Cudjoe, about 65.71 per cent of the candidates excelled in Mathematics last year. The figure, however, declined to 54.11 per cent in 2021

On the other hand, WAEC noted that “there were improvements in the performance of candidates at Grades A1 to C6 in Integrated Science and Social Studies as against 2020.”

Per the information released by the Council, 65.70 per cent of the candidates passed in Integrated Science, whiles 66.03 per cent excelled in Social Studies.