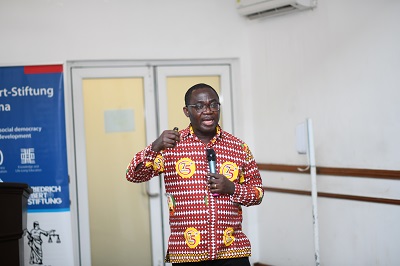 The Director of Labour Research and Policy Institute at the Trades Union Congress (TUC) has intimated that a recent attempt to streamline gratuity payments of Article 71 Office holders has proven to be a challenge.

This, Dr Kwabena Nyarko Otoo says, is because of some provisions in the Constitution that created a conundrum for the successful implementation of the Prof. Yaa Ntiamoa Baidu Committee’s report with regard to ex-gratia.

The report stated that the government ought to vary the payment of gratuity to MPs as mandated by the Constitution and incorporate it into a ‘superannuation’ pension scheme that ensures adequate income security for MPs in retirement.

The 2019 Committee, among other things, recommended the creation of this scheme to determine the remuneration for such public officials.

But Dr Kwabena Nyarko Otoo explained that the bottlenecks came up when critics argued that ex-gratia is a constitutional creation which cannot be sidestepped for the recommendation to go through.

Speaking on Newsfile, he explained that “a lot of recommendations were done, proposed and recommended but at the end of the day, we were told that ex-gratia is mentioned in the Constitution and you cannot use your report to amend or take away what is due us and what the Constitution has provided for us.”

Dr Otoo was part of the consultants involved in the formulation of the Prof. Yaa Ntiamoa Baidu Presidential Committee report.

According to him, not much may be achieved in this debate if issues such as these are not addressed adding that “all that also requires a change in the article itself, a certain amendment of the article.”

He admits that an absolute overhaul in terms of an amendment of the constitutional amendment will be a good step but one that “can be chaotic.”

DISCLAIMER: The Views, Comments, Opinions, Contributions and Statements made by Readers and Contributors on this platform do not necessarily represent the views or policy of Multimedia Group Limited.
Tags:
Dr Kwabena Nyarko Otoo
Ex-Gratia